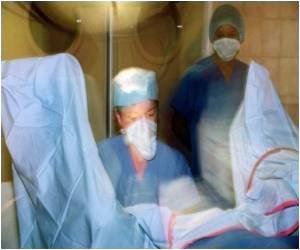 A final vote on Tuesday was delayed by lawmakers in Virginia on a highly contested bill that would oblige women in the eastern US state to undertake a transvaginal ultrasoundpreceding an abortion.

Republican Governor Bob McDonnell, a Roman Catholic father of five, was poised to swiftly sign the so-called "informed consent" bill -- adopted by the state senate earlier this month-- into law.

But a day after 1,000 protesters descended on the state capitol in Richmond, the House of Delegates held off on third and final reading of the legislation, leaving open the possibility it might yet be amended or dropped altogether.


It was not clear when the bill might come up for a vote again.

Abortion is quickly becoming a hot-button issue in the run-up to the November presidential election, with fast-rising Republican hopeful Rick Santorum in particular styling himself as champion of the pro-life cause.

Encyclopedia section of medindia explains in brief about confirmation of pregnancy in first trimester
Advertisement
Seven states already mandate pre-abortion ultrasounds, which pro-life activists believe would discourage women from terminating their pregnancies by informing them of the gestational status of their fetus.

Critics say the proposed, intrusive Virginia procedure -- involving an electronic probe inserted deep into the womb -- amounts to state-sanctioned rape, as neither a woman nor her doctor would be able to opt out of it.

The woman could request not to see the ultrasound, but the image would have to stay in her medical file for seven years.

Some legislators were Tuesday discussing making the ultrasounds optional, the Virginian-Pilot newspaper reported, citing two lawmakers including a conservative Republican.

In an unsuccessful motion Tuesday to kill it altogether, Democratic legislator Charniele Herring denounced the "extreme" bill as an attempt to restrict a woman's right to an abortion.

"There is no doubt that this bill... is fundamentally and seriously flawed," Herring told the overwhelmingly male House of Delegates as visiting high school students looked on from the public gallery.

Diaphragmatic Hernia Drug Interaction Checker The Essence of Yoga Blood Pressure Calculator Daily Calorie Requirements Drug Side Effects Calculator Nutam (400mg) (Piracetam) Turmeric Powder - Health Benefits, Uses & Side Effects Drug - Food Interactions Find a Doctor
This site uses cookies to deliver our services.By using our site, you acknowledge that you have read and understand our Cookie Policy, Privacy Policy, and our Terms of Use  Ok, Got it. Close
×