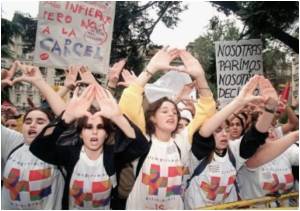 Spain's justice minister said on Wednesday that the country's conservative government plans to tighten abortion law to make it necessary for girls aged 16 and 17 seeking abortion to have their parents' consent.

Alberto Ruiz-Gallardon said he was drawing up a bill to change the former Socialist government's 2010 law which fully legalised abortion up to 14 weeks of pregnancy.

In order to ensure that women considering an abortion get better quality care the Royal College of Obstetricians and Gynecologists have issued new guidelines.
Advertisement

"Some of the principles announced by our party such as the requirement of parental consent in the case of minors (seeking abortion) will be included in this bill," Gallardon told a parliamentary commission.

The 2010 reform also allowed girls aged 16 and 17 to have abortions without parental consent, on condition that they could prove they risked suffering domestic violence if they told their parents.

Gallardon said the current law, which was contested at the time by his Popular Party, was adopted "without consensus".

The party took power under Prime Minister Mariano Rajoy last month after winning control of parliament in elections on November 20.

In its manifesto it promised to "change the current legislative model relating to abortion in order to reinforce the protection of the right to life as well as female minors".

Some groups criticised the planned reform on Wednesday.

"This reform is unjustified because the statistics we have do not show that there is a rise in abortions in this age group" since 2010, Francisco Garcia, vice-president of the Association of Accredited Abortion Clinics, told AFP.

"With this reform there is a risk that these women will resort to clandestine means."

"Most girls of 16 and 17 come accompanied by their parents," said Yolanda Besteiro, president of the Federation of Progressive Women.

"Only in extreme cases do they not, and it is precisely in those cases that they are going to be left defenceless."

Sinopril (2mg) (Lacidipine) Noscaphene (Noscapine) Turmeric Powder - Health Benefits, Uses & Side Effects The Essence of Yoga Accident and Trauma Care Blood Donation - Recipients Indian Medical Journals Blood - Sugar Chart Calculate Ideal Weight for Infants Iron Intake Calculator
This site uses cookies to deliver our services.By using our site, you acknowledge that you have read and understand our Cookie Policy, Privacy Policy, and our Terms of Use  Ok, Got it. Close
×