Abnormal Increase in Cancers Among Firefighters of 9/11 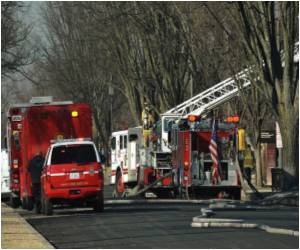 Many firefighters who helped find victims at the World Trade Center after the 9/11 attack seem to be suffering from cancer. As of June 2010, 345 ground zero workers have succumbed to different types of cancer.

Among the cancers, prostate, thyroid, leukemia, non-Hodgkin's, multiple myeloma, and esophageal cancers were on the increase.

Women Being Actively Recruited as Firefighters

The fire and rescue service in Lancashire is staging a special event to encourage women to take up firefighting as a career.
Advertisement

Al Hagan, head of the fire officers union, said, "I'm led to believe that the numbers for those cancers across all ranks in the Fire Department of people who worked at Ground Zero is up significantly, and we're all very concerned about it, as are our families."


Steve Cassidy, president of the firefighters union, said "It's a fact that New York City firefighters are dying of cancer in record numbers.We have buried 10 firefighters in just the last 15 weeks, seven with cancer. On September 10, 2001, they were young, healthy firefighters."