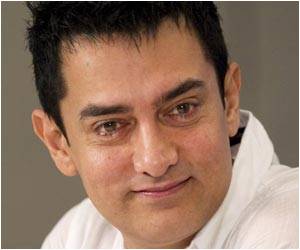 Actor Aamir Khan is a part of a nationwide campaign on malnutrition, which is more widespread in India than Sub-Saharan Africa.

The actor, the UNICEF brand ambassador for malnutrition, has launched the campaign through advertisements and short films to make people aware of the perils of malnourishment.

"He has shot 40 films in 18 languages," Caroline Dendulk, chief of communications in UNCIEF, said Sunday.


One in every three malnourished children in the world lives in India, she said.

Malnutrition limits development and the capacity to learn. It also costs lives: about 50 percent of all childhood deaths are attributed to malnutrition, health experts said.
Advertisement
In India, around 46 percent of all children under three years are too small for their age and 47 percent are underweight. Many are severely malnourished.

Madhya Pradesh has recorded the highest malnutrition (55 percent) and Kerala the lowest (27 percent).

Malnutrition is a state of physical weakness often caused by lack of food or lack of quality food vital for a healthy body.

According to the UNCIEF, malnutrition is also influenced by lack of access to health services, quality care for the child and pregnant mother as well as good hygiene practices.

Girls are more at risk of malnutrition than boys because of their lower social status.

Tool to Test Malnutrition in Cancer Patients Developed
Researchers have found a shorter version of a commonly used nutrition-assessment tool to test ......

Link Between Acute Malnutrition and Gut Microbes Identified
In African children, abnormal bacteria living in the gut are linked to severe malnutrition, say ......

Aamir Khan Joins Campaign Against Malnutrition
Aamir khan is really keen to take up social causes and now he is lending his mite for the campaign ....