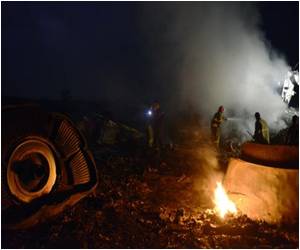 In Ukraine's war zone, inside a ramshackle and once-abandoned pharmacy in Donetsk, Doctor Andrei Volkov is thrilled. Medicine -- 150 bags of it -- has just arrived.

But Volkov won't earn any money from it. He plans to give it away for free.

"But we don't have enough of it," Volkov, 41 and thin with brown hair, said of such donations. "About 200 to 250 people come here every day, and half of them leave without the medicine they need."


Shortages are rampant, everything from antibiotics to cold remedies and -- after nine months of bloody turmoil in the country's worst conflict since independence in 1991 -- stress medications.
Advertisement
Since the start of the war in April between Ukrainian forces and pro-Russian rebels in the country's east, Volkov has been doing his best to distribute free drugs to those who need them.

He first concentrated his efforts on supplying rebel fighters with medicine, and the flag of the separatist and self-proclaimed Donetsk People's Republic still hangs at the pharmacy's entrance.

More recently he has expanded to civilians, with Kiev having cut funding to rebel-held territory.

Ukraine's aim in cutting funding has been to pressure the rebels it says are supported by Russian weapons and troops. But the move has also prevented residents from collecting pensions and welfare payments.

"When one child is sick, afterwards the others are sick too. It's a real problem to buy medicines for everyone. Here, they give us the necessary drugs," she said.

"When the fighting began, the original occupants of the pharmacy fled," Volkov said. "We reached an agreement with the owners of the location. He lets us use the building for free, but we have to pay the bills."

The seat-of-the-pants pharmacy is now open Monday to Saturday and concentrates its efforts on those most in need, particularly retirees, the disabled and single mothers.

"They can no longer allow themselves to buy medicine. It's too expensive," said one of Volkov's four colleagues, Yulia Zhiltsova, who is also a doctor.

Typical is Sergei Noulev, a retired, disabled man who was prescribed a drug that costs the now hefty sum of 400 hyrvnias (22 euros, $25).

From the hospital, "I was sent to the free pharmacy and I am waiting here hoping to have my medication," he said.

"We don't help only those who aren't covered socially. We also help civilians who have suffered from the war," meaning the wounded, doctor Zhiltsova added.

The 37-year-old red-haired doctor said most of the donations have come from Russians, but help has also come from French, German and Greece citizens, she said.

However, they denied having benefited from the Russian humanitarian aid that has arrived in convoys of white trucks.

"That aid goes directly to the (rebel) health ministry and is then redistributed to hospitals," Zhiltsova said.

In Donetsk and other large cities in Ukraine's east hit by the conflict that has killed more than 4,800 people, the distribution of humanitarian aid, particularly food, is reasonably organised. Charities including the Red Cross carry out near-daily distributions.

But when it comes to drugs, Volkov says his pharmacy is the only one he is aware of distributing free medicine, though an organisation financed by oligarch Rinat Akhmetov has held drug give-aways.

Such distributions have occurred at the recently built Donbass Arena football stadium, but Zhiltsova said the pharmacy does not participate.

"That's Ukraine. Now we are building ourselves a new republic," she said, though the oligarch, a Donetsk native, has received criticism from both sides, with Ukrainians having accused him of collaborating with the separatists.

In any case, Volkov and his team receive only sporadic donations. The previous one before the recent donation had arrived a month and a half ago.

While the new donation was certainly warmly welcomed, it was by no means perfect.

"There are many things we don't need, so we're going to give them to hospitals," Volkov said, pointing toward the 150 bags on the ground.

"Vitamins, antiseptics, that we keep. But we really need anti-tension and diabetes medicine, and we lack that."

Source: AFP
Advertisement
<< Rutgers Appoints Jasjit Ahluwalia as Dean of School of Publi...
No Polio Cases Reported in Syria for a Year: WHO >>

Ukraine Ill-Prepared for Trauma of War
Ukraine is still trapped in a Soviet-era approach to mental health and psychiatric hospitals so ......

Ukraine's Protest Moves from Barricades to Parliament
In Kiev, when reporter Mustafa Nayem called a protest against then-president Viktor Yanukovych's ......

Rocket and Artillery Attacks Preventing Sunflower Farmers in Ukraine from Gathering Their Harvest
The ongoing civil war in east Ukraine is having a detrimental effect on farmers....