New Mechanism can now be Adopted in Antitumor Drugs 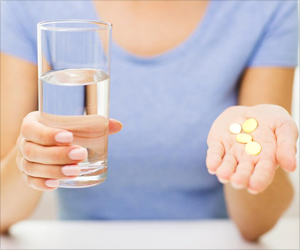 An alternative mechanism for effective antitumor drug -- an enzyme called L-asparaginase has been found and Some isoenzymes of this enzyme can block the growth of telomeres on DNA molecules, and this limits the number of divisions of a cancer cell found a new study published in Biochemical and Biophysical Research Communications journal.

"L-asparaginase enzyme has been used for the treatment of acute lymphoblastic leukemia (cancer of the hematopoietic system) in children for more than 35 years.

Advertisement
‘Drugs containing L-asparaginase enzyme or its isoenzymes are capable of limiting the cancer cell divisions by blocking the growth of telomeres, on DNA molecules’

In recent years, data on its effectiveness in NK/T-cell lymphomas (a type of skin cancer) have been published. We performed a meta-analysis of explored these findings in one of our recent articles"-- said one of the authors of the paper, Vadim Pokrovsky, professor of the Department of Biochemistry (RUDN).


The antitumor effect of this enzyme first became known in the 1950s, when scientists noticed that the serum of guinea pig blood with a high content of L-asparaginase stops the development of leukemia in mice.
Advertisement
This enzyme is present in a large number of bacteria, fungi, protozoa and even plants. For medical purposes, it is extracted from Escherichia coli (E. coli): the gene encoding L-asparaginase is inserted into the producer strain so that the enzyme can be obtained to produce commercial batches.

The antitumor effect of the enzyme is associated with the breaking down of asparagine. Asparagine is one of the amino acids, of which proteins are built. When L-asparaginase cleaves asparagine, many cells that are sensitive to the deficiency of this amino acid are killed. Above all, this refers to tumor cells that are unable to synthesize this amino acid independently.

RUDN University scientists, in collaboration with their colleagues from the laboratory of medical biotechnology (V.N. Orekhovich Institute of Biomedical Chemistry) and the laboratory of combined therapy of tumors (N.N. Blokhin Oncology Research Institute), discovered and investigated another, previously unknown effect of L-asparaginase.

To do this, they used the strain of L-asparaginase obtained from another microorganism, Rhodospirillum rubrum. Amino acid substitutions were introduced into this strain, and this allowed us to alter its biological properties.

It turned out that L-asparaginase can also inhibit (block) telomerase -- an enzyme responsible for elongation of terminal DNA regions (telomeres), the length of which determines the possible number of cell divisions.

Thus, scientists have discovered that L-asparaginase is capable of limiting the number of divisions of a cancer cell.

The work was divided into several steps. First, scientists isolated L-asparaginase and demonstrated its ability to inhibit telomerase in cancer cells.

At the second stage, the same effect was reproduced in vivo. Researchers took human tumor cell cultures and transplanted them to athymic mice (mice with absence of T-cell immunity, which prevents human tumors from growing in mice).

The desired effect was reproduced in model organisms: tumor growth was suspended, and this effect correlated with the shortening of telomeres and telomerase inhibition.

The researchers hope to obtain new enzymes with a stronger antitumor effect, which can be realized due to the presence of a dual mechanism described above. Along with the shortening of telomeres, L-asparaginase might possess other effects that are not yet known to science.

"The search for alternative effects of L-asparaginase, additional potential targets of this and other enzymes would allow us to design new enzyme-based drugs. That is, one enzyme will act immediately on a few metabolic targets of the tumor cell," -- Pokrovsky concluded.

Anti-tumor Drug Variations Prove Effective for Cancer Treatment
Variations of anti-tumor agents like epothilones could be effective even for drug-resistant cancer ....

Newly Synthesized Anti-Cancer Agent Much Powerful Than Taxol Drug
Trioxacarcins, a new form of cancer-killing compounds were discovered in the fermentation broth of ....

Cysts and Tumours
Ultrasound scan reveals multiple cysts and there is no function on that kidney when tested on DMSA ....