A Museum In Northern Ireland Will Display Titanic Bandmaster's Violin 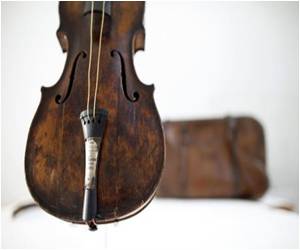 Officials said that the violin played by the bandmaster of the Titanic as the liner sank beneath the waves is to go on display at a museum marking the tragedy in Northern Ireland.

The instrument belonging to Wallace Hartley was found strapped to his body after he drowned with some 1,500 others on board the supposedly unsinkable ship in 1912.

It carries an inscription from the 34-year-old's fiancee to mark their engagement.


For decades the violin was believed lost but it was found in the attic of a house in northwest England in 2006.

It will be displayed at the Titanic Belfast exhibition from September 18 until October 13 before it goes to auction in Wiltshire, southwest England on October 19.
Advertisement
"We are honoured and excited that Titanic Belfast has been chosen to display Wallace Hartley's violin which he played on RMS Titanic," said the museum's chief executive Tim Husbands.

"This could very well be a once-in-a-lifetime opportunity for visitors to see one of the world's most famous and most valuable Titanic artefacts before it goes to auction."

The Titanic was built in Belfast and set sail from Southampton, southern England, for New York on April 10, 1912.

The band played the hymn "Nearer, My God, To Thee" to try to calm passengers while they climbed into lifeboats as the Titanic sank beneath the icy waves in the North Atlantic on April 15 after hitting an iceberg.

Hartley and his seven fellow band members all died after choosing to play on.

He was given the maple, spruce and ebony violin by his fiancee Maria Robinson to mark their engagement in 1910. She had a silver plaque fixed to the instrument engraved with the words: "For Wallace, on the occasion of our engagement. From Maria."

It is now thought that the instrument was inside a leather bag that was found strapped to his body 10 days after the sinking, and was then passed to Robinson.

Robinson never married and after her death in 1939, her sister donated the violin to her local Salvation Army band, where it passed into the hands of a music teacher and then to the unnamed owner in whose house it was discovered in Lancashire, northwest England.

After seven years of testing including MRI scans, researchers said in March this year that the instrument was genuine.

Both the violin and the bag with the initials W.H.H. will go on display at Titanic Belfast.

The instrument was recently on display in the United States.

Andrew Aldridge, from auctioneers Henry Aldridge and Son who are selling the violin, said the instrument was "one of the most iconic collectables from the 20th century".

It is expected to fetch at least a six-figure sum, the auction house said.

"The authentication process behind the collection has been a long and exhaustive one with some of the world's leading experts in their respective fields helping to assemble a conclusive package of independent reports to accompany the archive. "

Australian Billionaire Building New Version Of Titanic
A new version of the ill-fated liner the Titanic is being built by an Australian billionaire. There ...

Titanic Memorial Cruise Passengers to Get a Taste of the Real Thing
Yvonne Hume, the great-niece of the vessel's first violinist John Law Hume, has compiled the ......