The comparatively high number of American fans who witnessed their country's opening for the World Cup against England last weekend in Rustenburg, surprised them as much as it did others.

As the United States battled their way to a 1-1 draw, the American stars and stripes held their own at the stadium against England's St. George's cross, even though most locals were supporting the English. 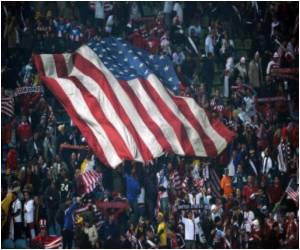 American stars and stripes held their own at the stadium against Englands St. Georges cross last weekend 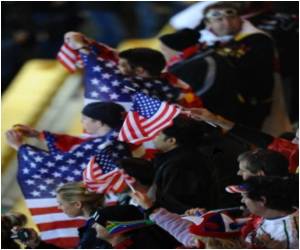 Americans have surprised the world by buying 132,000 tickets for this years World Cup, more than any other foreigners 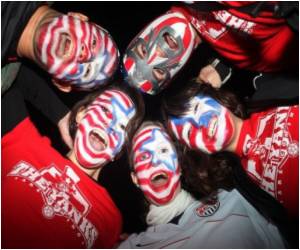 Americans are starting to care about football more and more

On Friday, red, white and blue will inundate Johannesburg, where the United States face off against Slovenia.


After decades of apathy about football, Americans have surprised the world -- not least themselves -- by buying 132,000 tickets for this year's World Cup, more than any other foreigners.

Soccer Is A Favorable Choice Of Exercise Training For Women

Researchers say that playing soccer can help women get in better shape than just running.
Advertisement
Even fans who have spent their lives playing and promoting the game say they're perplexed, if happily so, at the sport's seemingly sudden popularity.

"That one I'm stumped too," said Brian Moore, a management consultant from Atlanta, as he pondered US ticket sales over a pre-game beer last week.

"I think a lot of Americans are curious about Africa and want to come to Africa. But I have no clue why more Americans than others. To me it was very surprising. Maybe part of it is there's been a lot of negativity (about South Africa) in the European press."

That was one of many theories on offer as fans gathered for the game.

Maybe it's the unexpected success of the US team, which went to the Confederations Cup finals last year after pulling off a surprise win against Spain in the semi-finals.

Maybe it's the delayed pay-off of hosting the World Cup in 1994, an event that introduced world-class football to the United States on a large scale.

Maybe it's the slow but steady growth of Major League Soccer, the domestic league whose name betrays the ongoing dominance in US sport of both major league baseball and that other, rougher game of American football.

Whatever it is, Americans are actually starting to care about football.

"Even some of my friends who play other sports, if there's a game on, they'll watch it," said Stephen Clark, who travelled to Rustenburg from Washington.

It's only recently that American TV has consistently broadcast games.

ESPN, the country's leading sports network, is stepping up its coverage of the World Cup this year, hoping to bring in US fans who watched past World Cups on Spanish-language channels.

ESPN has committed itself to providing full coverage of the tournament, hiring respected -- mostly European -- commentators and renting out one of three studios overlooking centrepiece stadium Soccer City.

"Their operation is huge. They've got hundreds of people working there," said Robert Paltiel, an executive producer based in South Africa working for the network.

Paltiel said that in 31 years of producing football events across Africa and Europe, this is the first time he's seen ESPN cover the game at the same level as European broadcasters.

"Their whole infrastructure is impressive. They've got satellite trucks that are moving all over the place. They really are covering this World Cup," he said.

But football is still a long way from challenging the United States' main sports.

Following the England match, Laura Barber said that is partly a question of success.

"The USA just has so many other sports that, sorry, it sounds cocky, but we're good at them. They're bigger in the US, so soccer doesn't ever get the representation," she said.

Then she amended her statement in a way that will please those who hope to see the United States join the sport's broader community.

"Excuse me, not soccer. Correction: football."

Going Mad About Football: Time for Some Myth-Busting

In a documented first-of-its-kind case, a teenager died due to an overdose of muscle cream, used to soothe aching muscles.