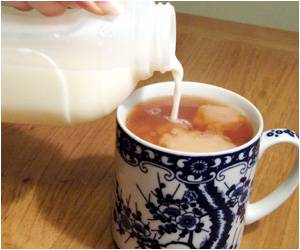 Experts have said that regular consumption of tea may help one to stay slim and healthy.

Leading nutrition scientists from around the world convened at the United States Department of Agriculture to present the latest research supporting the role of tea in promoting good health.

Adolescents can reduce weight and increase vitamin D levels in the body by drinking 8 to 12 cups of coffee or tea per week.
Advertisement

Numerous studies suggest tea supports heart health and healthy blood pressure, and appears to be associated with a reduced risk of cardiovascular disease, including stroke and heart attack.

Follow these quick and easy health tips to stay active and healthy all through your life.
Advertisement
"The many bioactive compounds in tea appear to impact virtually every cell in the body to help improve health outcomes, which is why the consensus emerging from this symposium is that drinking at least a cup of green, black, white or oolong tea a day can contribute significantly to the promotion of public health," he added.

Another research on tea catechins suggests that they may provide a benefit in maintaining body weight or promoting weight loss.

In a comprehensive review of the published data on this topic, researchers from Maastricht University, Maastricht, The Netherlands, found that 24-hour energy expenditure and fat oxidation increased when subjects consumed green tea and caffeine.

The results of a meta-analysis suggest that the increase in caloric expenditure is equal to about 100 calories over a 24-hour period, or 0.13 calories per mg catechins.

In a related review, researchers concluded that subjects consuming green tea and caffeine lost an average of 2.9 pounds within 12 weeks, while adhering to their regular diet.

At the end of the six-month clinical trial they found that 500 mg green tea extract (equivalent to 4-6 cups of green tea daily), alone or in combination with Tai Chi, improved markers for bone formation, reduced markers of inflammation and increased muscle strength in study participants.

This work supports earlier studies on the mental benefits of tea. In addition, two other studies provide a broader perspective on tea's effects on psychological well-being, showing benefits for tiredness and self-reported work performance, as well as mood and creative problem solving. These studies provide support for tea's benefits for mental sharpness, as measured by attention, mood and performance.

"In our study with adult subjects, we found drinking tea improved attention and allowed individuals to be more focused on the task at hand. These effects were found for two to three cups of tea consumed within a time period of up to 90 minutes," said symposium presenter Suzanne Einother, PhD, Unilever R 'n' D, Vlaardingen, The Netherlands.

Have breakfast like a king and dinner like a pauper -follow simple dietary principles to keep fit and avoid illness. Good health is intrinsically related to a healthy diet.
Advertisement
<< Meet The Man Who Beat Cerebral Palsy To Become a Doctor
Shower That Washes Your Clothes While You Take Bath >>

Watery Eyes
News Archive
News Resource
Advertisement
News Category
Do Instant Formula Foods Cause More Harm Than Good? Is a Plant-based Meat Healthier Than Animal Products? Are You Eating Enough Fiber to Stay Healthy? Preventive Vitamin A Supplementation is Missed by 2 in 5 Indian Kids Does a Mother's Diet Affect the Quality of Breast Milk?
More News
Sign up for Wellness Consult a Doctor Sign up for Selfcare

Blood Pressure Calculator Daily Calorie Requirements Blood Donation - Recipients Find a Doctor Accident and Trauma Care Find a Hospital Blood - Sugar Chart Post-Nasal Drip Drug Side Effects Calculator Diaphragmatic Hernia
This site uses cookies to deliver our services. By using our site, you acknowledge that you have read and understand our Cookie Policy, Privacy Policy, and our Terms of Use