A 132-pound Tumor removed from a Womans Ovary 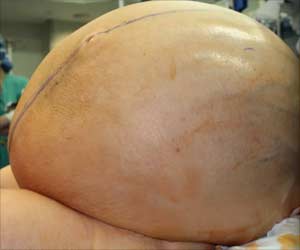 A 132-pound tumor was removed from a 38-year-old Connecticut woman's ovary at Danbury Hospital, a part of Western Connecticut Health Network.

Surgeons, physicians, and medical staff have cut the massive tumor out of the woman with just one surgery.

Advertisement
‘A 132-pound tumor was removed, along with the left ovary, six pounds of the extra skin caused by the tumor, and doctors have reshaped the woman's abdomen. This is the first ever largest tumor that has been removed, worldwide.’

The tumor had grown rapidly, i.e., about 10 pounds every week, making her wheelchair-bound. She was malnourished, but the tumor made her look overweight, as it was present right on her digestive tract.


The woman had been in pain for several months and had requested to stay anonymous, said Vaagn Andikyan, a gynecologic oncologist and assistant professor at the University of Vermont Larner College of Medicine.
Advertisement
The doctor said they he had never seen a tumor of this size and she was desperate for help.

So, Vaagn Andikyan assembled a team of about 25 clinical specialists, including gynecologic oncologist Linus T. Chuang, who helped in removing the tumor, the left ovary, six pounds of the extra skin caused from the tumor, and reshaped the woman's abdomen, all of which happened within a five-hour surgery.

Two weeks after the surgery, the woman has gone home and is making a full recovery. This is one of the largest tumor case ever in the world that has been removed.

After the removal of the tumor, skin, and fluids, the patient was about 185 pounds lighter.

"Four weeks after surgery, my front desk office was shocked. They looked at her name three times, and they weren't sure it was the same patient.  The patient herself said when she went back to work; they didn't recognize her," said Andikyan.

John Martignetti, who is the network director of the Laboratory for Translational Research at the WCHN Biomedical Research Institute, is currently investigating the tumor.

Auditory Tumor
Auditory Tumor or Acoustic neuroma is a benign growth that arises on the vestibular cochlear nerve. ...