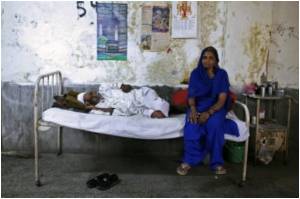 One of the main objectives of the "TREAT TB" research grant is to conduct a clinical trial to look at relatively shorter and more effective multidrug-resistant tuberculosis (MDR-TB) treatment than the current regimen for MDR-TB.

"One of the colleagues had done a study in Bangladesh which was just published few months back - that a shortened standardised regimen of just nine months was effective in treating MDR-TB patients. One of the challenges of treating MDR-TB is that it is a long and difficult treatment regimen - so this was a big breakthrough. What we are trying to do in our MDR-TB trial, which is called "STREAM" is to see whether the same results of Bangladesh trial can be replicated in four other countries. India is one of the countries being considered but final countries will be selected at the end of November 2010" said Dr ID Rusen, Director, Department of Tuberculosis, International Union Against Tuberculosis and Lung Disease (The Union).


"The Union as an organization had a role in clinical trials for a number of years but pretty limited usually one trial going on at a time, and in the past couple of the main trials were looking at the 6 months of TB treatment versus 8 months of treatment. One of the study was called Study A, which first showed that 6 months was a more efficacious treatment and then we followed it up with another trial that looked at fixed dose combinations of treatment showing that it is more effective and more convenient than a bunch of loose tablets. Those were the main trials we have been involved. More recently we have been awarded a grant from USAID called TREAT TB, it is a research grant" further explained Dr ID Rusen.

The lungs are our organs of respiration. It is within these, that exchange of gases takes place.
Advertisement
TREAT TB initiative aims to address the gaps in the current research of new diagnostic tools in order to inform and improve the national and global policies and practices. Two types of tools are assessed:

2) those promising tools for which final technical deliberations and policy decisions at the global level have not yet been reached. The goal of TREAT TB is to identify the remaining gaps in evidence and associated opportunities to contribute to international efforts supporting the successful implementation of new diagnostics.

"In Bangladesh study they had followed 200 patients on the standardised regimen. We are going to do this in a more systematic clinical trial format in TreatTB initiative to be as confident of the results that were first published of the Bangladesh study" said Dr Rusen.

"Cure rate was over 80% in Bangladesh among MDR-TB patients without relapses using the shortened regimen of nine months. The current MDR-TB treatment is shortest at 18 months and often runs up to 24 months or longer, and reported success rates globally are not close to 80%. So the fact that the treatment success rates were so high in Bangladesh study, the regimen seems to be more tolerable to patients partly because of a more shortened regimen, so the authors in the study published were quite optimistic of the results" said Dr Rusen.

Talking about diagnostics and the methods used in Bangladesh and proposed to be used in the TREAT TB study, Dr Rusen said: "So what they did in Bangladesh and what we are trying to do in this study is to use molecular test for early diagnosis of resistance to rifampicin and by extension of MDR-TB, and that would be required to put the people on the regimen. Then drug-susceptibility tests (DST) would further confirm. In this study, the samples would be sent to a laboratory in Belgium to test for anti-TB resistance and to make sure that the results are accurate. Actual diagnosis and initial start of the treatment (as per study protocol) would be based on a simpler molecular test done on-site."

Remarkably, Dr Rusen underlines the critical importance of community engagement and support in conducting these studies and much higher treatment success rates. "In Bangladesh, there was a heavy emphasis on patients' support to make sure that the MDR-TB patients have all the support they need, treatment was given as conveniently as possible and with shorter time period people were more encouraged to adhere to the treatment" said Dr Rusen.

There was a combination of factors that could have ensured higher treatment success rate in Bangladesh. Like some of the more difficult treatment that is part of the standard regimen were given for shorter duration thereby making the regimen more tolerable to patients.

"What we hope to do in this study itself is to replicate that patients' support. It may be different in each country on how it is done in order to ensure what is needed in the community or by the patient is done" said Dr Rusen.

"The number of people with MDR-TB is estimated to be 450,000-500,000 and some estimates suggest that fewer than 10% get treated. Such a small number of MDR-TB patients are actually being treated and part of the reason is that it is such a difficult lengthy treatment. So to increase access to MDR-TB treatment, it is important that we also find treatment that can be as accessible and as effective as first-line treatment. It is very important to show that such a relatively simpler regimen much shorter in duration than current regimen can be more effective and successful in MDR-TB patients. Also more the number of MDR-TB patients who are treated, and the earlier they are treated, less will be the ongoing transmission of MDR-TB in the community" said Dr Rusen while outlining the potential public health outcomes of this important research.

"From the public health point of view, and global TB control point of view, it is an important study. Again we also think it is important because despite promising results in Bangladesh and before those results are used more widespread, it is vital that the results are replicated in a more objective way in a properly conducted trial such as this" said Dr Rusen.

One of the areas Critical Path to TB Regimens (CPTR) is addressing as others is preparation of sites for conducting research on TB drugs or clinical trials. I would just emphasize how important that is, and as we go about in this clinical trial, we are currently in countries trying to assess sites. It gets so essential that there are sites available that can conduct a well-done high-quality research to give the answers that are necessary for programmes" explained Dr ID Rusen.