Written by Amrita Surendranath
Medically Reviewed by The Medindia Medical Review Team on April 13, 2017 at 5:10 PM

Oral cancer awareness month is observed to improve understanding about oral cancer, which is any malignant neoplasm found on the floor of the mouth, the lip, lining of the tongue or the palate. Most of the oral cancer cases are squamous cell carcinoma. There is a high prevalence of oral cancer in India and it is among the top three cancers prevalent in the country.

In India and similar other developing nations, patients from low income and middle income families do not have access to good, well organized, quality cancer treatment facilities. To complicate procedures, these families are often faced with high treatment expenditures which can further push them into poverty.

Incidence of Oral Cancer in India

According to The International Agency for Research on Cancer:
Since cancer registry is not compulsory in India, the present incidence of oral cancer could be higher than recorded. In the United.States, 49,750 new incidences of oral cancer are identified every year. Patients who do survive this type of cancer suffer from facial disfigurement and difficulties while speaking and eating. There is a high mortality rate associated with this cancer as it is usually identified during the later stages of the disease. Globally, one person dies due to oral cancer every hour, increasing the need to raise awareness about the disease. 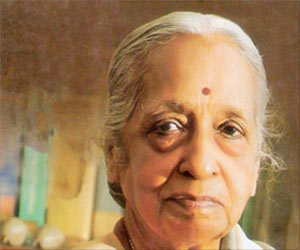 A well-known and distinguished doctor, she committed her life to improving the lives of cancer patients. Dr V.Shanta was born in a distinguished scientific family, her maternal grandfather's brother was Sir. C.V.Raman and her mother's brother was Shri. Chandrashekar, both Nobel Laureates. She joined the Cancer Institute in 1955, which was established by the Womens' Indian Association Cancer Relief Fund in 1954. She has dedicated over 50 years to the mission of organizing care of cancer patients. Dr. Shantha played an important role in the development of the Cancer Institute (WIA), from a cottage hospital of 12 beds to an important landmark in cancer care, of national and international repute.

Some of her achievements and important positions held include

Medindia: What are the causes for Oral Cancer In India?

Dr. V.Shantha: Lack of sufficient oral care is one of the important reasons; tobacco smoking and chewing are other major factors. Even with all the advertisements against tobacco use, people still continue the practice. Oral cancer is more prevalent among males than in females because of this habit of tobacco use.

Medindia: You have been associated with one of the premier cancer institutions in India - what has been the major stumbling block?

Dr. V.Shantha: The major problem that I have faced is misinformation about cancer. The minute you speak about cancer, they begin to think about death and misfortune. This institution was considered as the end point for people suffering from cancer; people who were admitted here were believed to have never been cured. It was believed that nothing could be done for cancer. In the early days, family support was lacking and people left their dear ones here with the belief that they would die. But a lot has changed over the past 60 years, with many treatment options available. It is a remarkable change and there are many types of cancers that are curable. But people continue to believe that cancer is not curable; this has to change, and people's mindset should change.

In the 1950s pediatric cancers were fatal, but 60% of the pediatric cases that we see today are cured. There is an improvement in survival but the stigma still remains.

Medindia: What are some of the ways that cancer can be prevented?

Dr. V.Shantha: The food we eat plays an important role. Habits like tobacco smoking and consuming alcohol should be restricted and a healthy lifestyle should be maintained. Lifestyle factors play a significant role. Good oral hygiene practices should be followed, like rinsing the mouth after every meal and brushing the teeth before going to bed everyday. One of the main causative factors for oral cancer is the Human Papilloma Virus or HPV. Sexual hygiene will help lower the risk for cervical cancer.

Children are exposed to passive smoking, which is another factor for cancer. By following proper diet, hygiene and lifestyle modifications, cancer is preventable.

Medindia: Recently the U.S. Food and Drug Administration approved genetic tests to screen for diseases, including cancer, your comments on this?

Dr. V.Shantha: Genetic tests for cancer have been available for the past 10 years and they do indicate the risk for cancer. But they are very expensive and not everyone can afford it. Further research should be carried out to develop a less expensive method of testing. There is a lot of research that we carry out in our organization to improve our understanding of the disease.

Medindia: You entered the profession when not many women were present. How is the present scenario?

Dr. V.Shantha: Now there are nearly 50% of women in the medical profession. Though I am happy with the numbers, I would like to tell the current breed of doctors to follow an ethical medical practice. There are numerous advances in technology but empathy is lacking. Nobody wants to care for the patient in terms of providing emotional support. Doctors should respect the patient, which is of utmost importance.

Medindia: What was it like when you won the Padma Bhushan award doctor?

Dr. V.Shantha: Personal awards mean nothing to me. The award is for the institution and the support it has provided. Nothing is an individual effort, it is the effort of the entire team that has been recognized. Like Dr. Abdul Kalam said, if we love the institution that we work for, if we are proud of it, then we will work hard.

Medindia: What is your message to society on Oral cancer Awareness Month?

Quiz on Oral Cancer
Oral cancer refers to abnormal growth of cells that are malignant in nature in the oral cavity. ......

New Antibody Test Helps in Early Detection of Oral Cancer
A new antibody test has been developed, that helps to detect the risk of cancer of the oropharynx .....

Program on Awareness About Oral Cancer and Oral Hygiene to be Held at JIPMER
'Health Education Initiative' was launched by JIPMER to improve awareness about the health and ......

Leukoplakia
Leukoplakia refers to a painless, raised white patch in the mouth that does not go away on rubbing, ...

Oral Cancer
Oral cancer is a cancer that develops in any part of the mouth. It is more common in men over 40....