Eman Ahmed, weighing 500 kg, was one of the heaviest women in the world and she arrived in India in February to undergo a bariatric surgery that would help her lose weight rapidly. Thirty six year old Eman, from Alexandria in Egypt, had to travel by a special cargo plane to reach India. There was a fully equipped truck waiting for her at the airport, along with an ambulance and a police patrol car, to escort her to a specially built room at Saifee Hospital, Mumbai. She was lifted with the help of a crane, along with the bed that she was lying on while traveling.

Obesity
Obesity is a condition where there is excess accumulation of body fat which poses a risk to the health of the individual. It can affect children and adults.
Advertisement
‘Dr. Lakdiwala recommends genetic test for overweight children which would help provide necessary care from childhood.’

Eman Ahmed is believed to be suffering from an LEPR mutation that lowers feeling of satiety or fullness after a meal. So she continues to eat.
How Will Bariatric Surgery Help Eman?

A well-known weight loss surgery called bariatric surgery was used as a last resort to treat Eman who was dangerously obese. There are two types of this surgical method
Chairperson of The Institute of Minimal Asurgical Sciences and Research C, Saifee Hospital's leading bariatric surgeon, Dr Muffazal Lakdawala, spoke to Medindia exclusively about treating Eman. 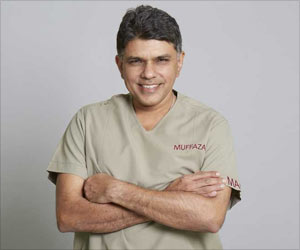 Q. How did you become an obesity surgeon?

Ans. In 2003-2004 I joined Johnson and Johnson, India and they were training people to become a laparoscopic surgeon. There was very little awareness about this condition and most doctors felt that there was too much of risk involved. Moreover, they felt there would not be enough patients, I felt that this was a new and exciting field and I had nothing to lose. That was the start, after which this field has grown tremendously.

Q. What is the prevalence of obesity in India?

Ans. I can state that in the number of patients who visit the clinic. 18% of children are overweight with 6% obese, 2% of the adult population is obese. India ranks 3rd in obesity.

Q. What is the reason behind the high obesity figures in our country?

Ans. We have a high genetic predisposition for obesity, combined with unhealthy lifestyle factors. We take the worst from the Western culture and eat a lot of fast food. Even Indian fast food is very unhealthy. Sugar is the biggest enemy for obesity.

Q. How did you get to meet Eman and why did you decide to help her?

Ans. Eman is looked after by her mother and sister, she has been heavy since her childhood. She suffered a stroke when she was 11 years old that affected her mobility. They have been trying to reach out to doctors from across the world, but did not meet with any success. They posted their request across various social media channels but they did not receive any help. A friend of mine saw one of their posts and sent them a letter stating that there was a doctor in India who is trained to help with such conditions. They got in touch with me and I went and met them.

Q. Your move to treat Eman has reached international fame. Your comments on that.

Ans. It has reached international fame because of her sensational weight- 500kgs. She couldn't even move her neck and it has affected the quality of her life. She is 36 years old and for the past 25 years, she has been bedridden. Due to the lack of movement, her legs below the knees are not well developed. She can't speak and could sip liquids. When I met her at the hospital in Alexandria, she was fed lying down, I was worried that she would aspirate any minute.

The media glare has made it difficult to treat her. However, it has been utilized to gain a cloud fund to treat her. People have provided from 500 to 1000 rupees to even lakhs. Our hospital, as well, has helped her financially.

Q. What is the medical support that you provided her with?

Ans. She weighed 498 kg before she reached Mumbai. Initially her creatine levels were 6.5 with 37% oxygen saturation and there was a failure of the right side of the heart that led to fluid accumulation. After we drained her fluid, she lost weight and reached 380-390 kg. We consulted with experts from Melbourne, Cambridge and Harvard and performed the bariatric surgery. Post-surgery, her weight has dropped to 250 kg, her heart condition is controlled, her thyroid is normal and creatine levels are also normal. Fluid accumulation has also been lowered.

Q. What is your goal weight for Emam?

Ans. My goal was to make her sit up and indicate if she wanted to pass urine or stool, which she is able to do now. She is currently 173 kg, further to this, she requires neurological support and speech therapy. We have done our part in the obesity clinic, a neurological clinic can take up the next part of the challenge. Her sister wants us to make her walk, however this is not possible, we want to send her back but her sister does not want to take her back.

Q. What is the reason behind Eman gaining so much weight?

Ans. Eman has a rare mutation in the LEPR gene, for which we need an MC4R agonist that is currently unavailable. I recommend that young children who are overweight should be made to undertake genetic tests to determine if they carry this mutation so that the right care and support may be provided.

Your Child Is At 40% Risk Of Obesity If You Are Obese
Obesity can be inherited from your parents.We inherit not merely our likes and dislikes but also our bodily structure from our parents.

Physical Activity May Help Outweigh Impact of Obesity on Cardiovascular Disease
Physical activity helps reduce the risk of cardiovascular regardless of the body mass index and age.