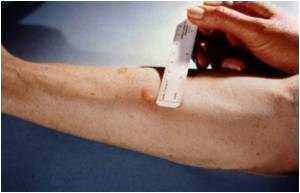 In China in 2011, around 900,000 cases of tuberculosis were discovered and treated, says health ministry.

Xiao Donglou, a health inspector from the ministry, said China was now focusing on HIV-TB co-infections.


He said over 1,700 HIV-TB co-infections were reported last year.

China is also cooperating with the Global Fund to Fight AIDS, Tuberculosis and Malaria.

Tuberculin skin test and Interferon - Release Assays are tests used to screen for tuberculosis.
Advertisement
Under another programme helped by the Bill and Melinda Gates Foundation, the time needed to diagnose a case of drug-resistant tuberculosis has been shortened from six to eight weeks to just six hours using state-of-the-art technology, the official said.

The lungs are our organs of respiration. It is within these, that exchange of gases takes place.
Advertisement
<< Link Between Food Aroma and Bite Sizes
Effect of Low-calorie Diet in Bowel Disease >>