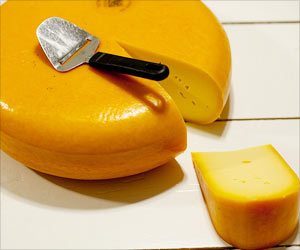 The dairy federation has warned the Dutch cheesemakers to increase security around their storerooms followed by a spate of top-end cheese thefts.

At least six cheese makers have been burgled over the last year, with criminals seemingly having a nose for ripened "Boerenkaas" (Farmers' Cheese), considered a Dutch specialty protected by an appellation.

Cottage cheese is often disregarded because of its mild & almost bland taste. However, there are plenty of healthy recipes that taste great and offer you all the health benefits of cottage cheese.
Advertisement
‘At least six cheesemakers have been burgled in the last year. About 8.5 tonnes of cheese valued at almost 90,000 euros ($97,800) had been stolen. ’

"We've never had a problem before last year, when at least six farmers were burgled and had their cheeses stolen," said Irene van de Voort, chairwoman of the Dutch Dairy Farmers' Producer Federation (BBZ).


"We are worried about the situation and have advised our members to increase security," she added.

Respected Dutch daily tabloid the NRC reported that at least 8.5 tonnes of cheese valued at almost 90,000 euros ($97,800) had been carted off during the heists.

Cheese is a good source of calcium and protein. A small cube of it can be an apt high protein snack option.
Advertisement
The paper said the largest theft happened in the small southern town of Hellouw near Den Bosch, where some 200 of the famous round yellow discs, worth about 26,500 euros, were stolen from a cheesemaker in one night.

Elsewhere in the southwestern city of Bergen op Zoom, some 150 cheeses -- each weighing around 12 kilograms (26.4 lbs) -- disappeared.

But exactly who is taking the cheese remains a mystery, with no clues left behind.

And police officials, who declined to be named, said the thefts were being investigated as isolated incidents.

Cheese farmer Marjo Huijsmans told NRC it seemed the thieves knew exactly how to pick out the best top-quality cheeses.

"They left the newly-made cheeses and took a selection of the ripening cheeses," she said.

The stolen cheeses were most certainly destined for the export market, said Onno Boersma of the Dutch Dairy Trade Association.

"Firstly each cheese is stamped with a number, so you can see exactly where the cheese comes from. Also, the Dutch cheese sector is not that big... if you tried to sell it, it will be spotted immediately," he told AFP.

Making such cheese "is a specialized skill and it takes special knowledge to make it. It's a very valuable product," he stressed.

"These farmers are hardworking people, who not only have to milk their cows but hand-make their cheese. Imagine how frustrating it is when you realize that your hard work has disappeared."

US Cheese Lovers Struggle to Save 'Mite-ridden' Mimolette

Cheese shop owner Jill Erber, is leading a desperate crusade to convince US authorities not to ban one of her products over the tiny mites that live on its rind.
Advertisement
<< Lassa Fever Outbreak In Nigeria Claims 40 Lives
Expand Your Friendship Circle to Enjoy Healthier Life >>

An 18-year old girl in Britain suffers from rare eating disorder that has made her eat just cheese and chips for the past eight years.

Surprising Benefits of Dairy
News Archive
News Resource
News Category
Milestone In Voluntary Blood Donation Achieved Samsung Reinvents Toilet for the Poor Which is a Better Form of Exercise: Daily or Weekly? First Phase of Foot-and-Mouth Disease Vaccination Shocking News: Polio Cases Return After a Decade in the US
More News
Sign up for Wellness Consult a Doctor Sign up for Selfcare