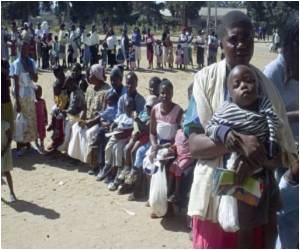 A measles outbreak has claimed the lives of 70 children in Zimbabwe over the past two weeks, mostly among families from apostolic sects that shun vaccinations, state media said Thursday.

"We have started receiving reports of deaths due to a suspected measles outbreak (last) Tuesday and the numbers are continuing to grow," health ministry disease control director Portia Manangazira was quoted as saying by the state-run daily, The Herald.

"The persistent refusal (of immunisations) by some segments of society means these closed communities have large numbers of unvaccinated children," Manangazira said.


Members of some apostolic sects in the country shun vaccinations and all other forms of Western medicine, saying it contradicts their belief in supernatural powers.

The Divya Hospital in Shastri Nagar area of Ghaziabad has been sealed by police after nine-month-old twins died following measles vaccination.
Advertisement
Martin Dinha, governor of Mashonaland Central province, one of the areas affected by the outbreak, said the government's response has been slow.

"I am not happy with the response from the ministry of health to this issue," Dinha told The Herald.

"No intervention has so far been done by health officials, yet we alerted them of the outbreak."

The disease mostly affects children under the age of five.

China on Saturday launched a measles vaccination programme targeting 100 million children in a bid to eradicate the disease, a leading cause of avoidable death in developing nations, by 2012.
Advertisement
<< Health Fears Lead to Suspension of Diabetes Drug Avandia
Indians in US Face Higher Diabetes Risk Than Other Asian Im... >>