70 Years of Peace in Europe Celebrated by Thousands of Scouts 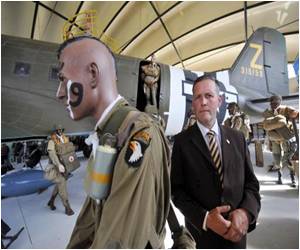 The 70 years of peace in Europe was celebrated by several thousand scouts at Omaha Beach on Saturday. The latter was one of the Allied landing beaches in France's northern region of Normandy during World War II.

Up to 3,500 people attended the gathering, police said, including around 2,000 scouts hailing mainly from the United States and Europe.

The former director of a WWII museum in northern France is facing charges of fraud.
Advertisement

"Scouts have a function in society of helping and serving others. And there, we have proof of our role in society and we thank those who, 70 years ago, gave their lives to liberate us," said French scout Gabrielle Steiblen.


"I mean, it's a great experience to know each other, that's what I think about this place," added American scout Dominic Mason.

Organised by the Transatlantic Council Boy Scouts of America and Normandy body "Planete Bleue... SOS," the ceremony included the projection of archived images on two huge screens, accompanied by music from the University Choir of Lower Normandy.

A new mobile app that puts players in the cockpits of World War I airplanes and lets users fly solo was recently launched.
Advertisement
Three French jets flew over Omaha Beach and the fast patrol boat, "the Broadsword", of the Cherbourg maritime police made a sweep in front of the crowds to commemorate the "many young Americans who sacrificed their lives", the organisers said.

The gathering was the seventh organised by the Transatlantic Council Boys Scouts of America in Lower Normandy since 1994.

Since the Second World War, former UK Prime Minister Margaret Thatcher has been voted Britain's most successful PM .
Advertisement
<< Thousands of Young Catholics Meet in Croatia to Pledge Thei...
Religion is Another Battleground in Eastern Ukraine >>

Benefits of Meditation / Meditation Therapy
News Archive
News Resource
Advertisement
News Category
Five Love Languages Every Couple Should Know Go for a Walk to Speed Up Your Brain Function 5 Types of Tea Women Should Drink Daily Bodychecking Experience Does Not Protect Teen Hockey Players from Injury Yoga: A Powerful Weapon to Fight COVID-19
More News
Sign up for Wellness Consult a Doctor Sign up for Selfcare