The European gay and lesbian parade Europride is expecting about 50,000 people for its annual festival in the Swiss city of Zurich on Friday and Saturday, but reportedly without Mr Switzerland. 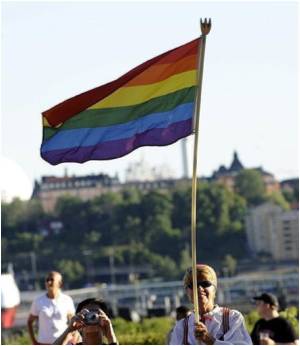 "It's above all a political demonstration, to defend lesbian, gay and transsexual rights. But we are not just here to demonstrate, we're also going to party," the event's spokesman Michael Rueegg told AFP.

"We're expecting at least 50,000 people, but maybe we'll have double that amount, it's hard to predict," he added.

The festival, which was held for the first time in London in 1993, takes place in a different European city every year and traditionally attracts participants from all over the continent.

This year's Europride also coincides with the 40th anniversary of the first gay rights movements in the United States.

"We have obtained a lot in Europe, especially recognition of our rights," Rueegg said.

Zurich, Switzerland's biggest city, is festooned with the homosexual movement's traditional rainbow colours for the occasion, under the impetus of its recently-elected Socialist Party mayor, Corine Mauch, who is openly lesbian.

But the festival, in the home of the country's notionally conservative business and economic establishment, is not without its critics.

The organisers of the Mr Switzerland pageant have expressly warned their current male icon, Andre Reithbuch, to stay away from the parade, the Swiss tabloid Blick reported.

The Christian social union (BCS), a lobby group, called for the defence of the "Christian family model" and is launching a poster and leaflet campaign during Europride.

A lobby group for family values adopted a harsher stance, condemning "manipulation by the homo lobby" on its website and castigating what it called the "psychological" problems of homosexuals.

However, the organisers feel they can keep up the party atmosphere with message of tolerance.

"We'll have 250,000 cans of beer on ice for the event," Rueegg said, claiming that "heterosexual men would surely not like to miss that."

A UK man, forced to leave his job because of merciless taunting by his colleagues who took him to be a gay, has won the right to claim compensation from his employers.

California's Supreme Court upheld a ban on gay marriage but said some 18,000 same-sex weddings carried out before the ban took effect would remain valid.