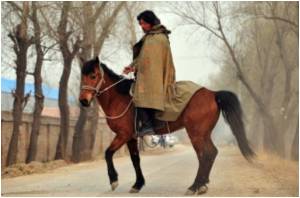 A new species of fossil horse from 4.4 million-year-old fossil-rich deposits in Ethiopia was discovered by two teams of researchers.

According to the scientists, about the size of a small zebra, Eurygnathohippus woldegabrieli-named for geologist Giday WoldeGabriel, who earned his PhD at Case Western Reserve in 1987-had three-toed hooves and grazed the grasslands and shrubby woods in the Afar Region.

Co author of the study, Scott Simpson from Case Western Reserve's School of Medicine said the horse fills a gap in the evolutionary history of horses but is also important for documenting how old a fossil locality is and in reconstructing habitats of human forebears of the time. This horse is one piece of a very complex puzzle that has many, many pieces.


The researchers found the first E. woldegabrieli teeth and bones in 2001, in the Gona area of the Afar Region. This fossil horse was among the diverse array of animals that lived in the same areas as the ancient human ancestor Ardipithecus ramidus, commonly called Ardi.
Advertisement
A year later, they returned and found part of the connecting shaft, which was split lengthwise but provided the crucial full length of the bone. The long slender bone indicates this ancient species was an adept runner, similar to modern zebras, and analyses of their teeth indicated they relied heavily on eating grasses in the grassy woodland environment.

The horse had longer legs than ancestral horses that lived and fed in forests about 6 million to 10 million years ago, Simpson said. The change helped the more recent horses cover long distances as they grazed and flee lions, sabre-tooth cats and hunting hyenas that would run down their prey.

The other fossils they found included teeth, which are taller than their ancestors' and with crowns worn flatter-more signs the horses had adapted to a grazing life. Analyses of the isotopic composition of the enamel confirmed that E. woldegabrieli subsisted on grass.

The study was published in the Journal of Vertebrate Paleontology.

Fish Fossils can Shed New Light on Humans Earliest Ancestry
The discovery that studying rotting fish can shed new light on our earliest ancestry, has been made ...

Songbird Fossils Reveal That Hepatitis B Virus may be Over 19-mn-year-old
Biologists at The University of Texas at Arlington were able to locate fragments of the modern ......