Worldwide, HIV and AIDS affect 37 million people. Nearly 1.2 million die each year from the diseases. HIV increases a person's risk of getting tuberculosis (TB) by 25 times or more; it is the leading cause of death in patients with HIV.

There was no added benefit of using four drugs for tuberculosis over just using one drug, isoniazid, to save lives in people with advanced HIV/AIDS, revealed a report on the so-called REMEMBER (Reducing Early Mortality and Early Morbidity by Empiric Tuberculosis Treatment) study - a 10-nation, randomized clinical trial of adult outpatients.

The research team, jointly led by scientists at the Johns Hopkins University School of Medicine, the University of Pennsylvania and the University of North Carolina, says it thought the standard four-drug regimen would improve survival rates over isoniazid-alone therapy to prevent tuberculosis. But the report, published in the The Lancet, instead validates the World Health Organization guidelines - established nearly 20 years ago - for prescribing isoniazid to even the most vulnerable, advanced HIV/AIDS patients as soon as they start antiretroviral therapy for HIV.


‘There was no added benefit of using four drugs for tuberculosis over just using one drug, isoniazid, to save lives in people with advanced HIV/AIDS.’

Overall, the researchers report that the low mortality rate they found among all study participants supports systematic TB screening and preventive isoniazid therapy in all outpatients with advanced HIV.

Gupta says recent TB prevention studies enrolled people with less advanced HIV, namely those with higher counts of the protective CD4 T lymphocyte cells. For example, in the 2015 TEMPRANO trial, 41% of participants with HIV had a CD4 count greater than 500. A CD4 count less than 200 signals a stage 3 infection (AIDS). In the REMEMBER study, the team enrolled people with CD4 counts of less than 50.

"This was the very patient population we were most concerned about because of the World Health Organization's recommendation to use only one drug," says Gupta. "Some investigators feared that the use of just one drug would inadequately treat undiagnosed, subclinical TB and lead to more rapid drug resistance, which would be deadly."

For the new study, conducted from October 2011 to June 2014, researchers enrolled 850 participants - 450 male and 400 female - 13 and older, with a median age of 36, from 18 sites in 10 countries - Malawi, South Africa, Haiti, Kenya, Zambia, India, Brazil, Zimbabwe, Peru and Uganda. It excluded those with suspected or actual TB.

All participants were started on antiretroviral therapy. Half (424) were randomly assigned to preventive isoniazid therapy and half (426) to the four-drug combination used as the standard treatment for TB, though it was used in this case as a preventive measure. The four-drug cohort received a weight-adjusted, fixed-dose combination of rifampin, isoniazid, ethambutol and pyrazinamide daily for eight weeks, followed by a fixed-dose combination of rifampin and isoniazid daily for 16 weeks, beginning within seven days of receiving their initial antiretroviral therapy. The single-drug cohort received 300 milligrams of isoniazid daily for 24 weeks.

After 24 weeks, one in 20 participants from each group died mostly from complications related to HIV/AIDS, including meningitis, cancer and TB. A total of 49 participants developed TB, and drug resistance developed in three participants in each group.

Overall, Gupta says, there was more 'disease burden' among the multidrug treatment group over the 24-week trial period. 72 participants from the four-drug cohort either died or had significant progression of their HIV/AIDs, while only 53 participants in the single-drug cohort experienced the same at 24 weeks.

"We went into this trial thinking that using the full, four-drug tuberculosis treatment would be able to prevent more deaths," says Gupta, compared to the isoniazid therapy alone. "We found - unequivocally - no difference," she says, with an absolute risk difference between the two treatment groups of 0.06%.

Gupta says that in addition to preventing TB and being better tolerated, isoniazid is more affordable than diagnosing and treating TB. This is especially true for poorer countries, where HIV and AIDS - and co-infections, such as TB - are undertreated in part because of cost. On average, the cost of isoniazid is pennies per pill, while it can be six times more expensive to try to diagnose and treat TB in each patient.

Gupta emphasizes that antiretroviral therapy by itself reduces the TB risk for most patients, but an estimated one in five in 'resource-limited' settings die within six months of starting HIV treatment.

Autopsies often reveal these patients had undiagnosed tuberculosis, which contributed to their deaths. Failure to diagnose TB happens, in part, she says, because the most common test for tuberculosis - sputum acid-fast bacilli testing - has low sensitivity in patients with advanced HIV. Results of other TB tests can take as long as eight weeks because tuberculosis cultures grow slowly. Thus, routine preventive therapy makes sense, she adds.

Use of isoniazid alone to prevent TB in patients with HIV has been a World Health Organization guideline since 1998 but has been hampered by noncompliance among health care providers concerned about both the tolerability of the treatment and the promotion of drug resistance, especially among the most vulnerable patients with advanced HIV.

The REMEMBER study researchers found isoniazid was well-tolerated among their participants and that there was no evidence of increased drug resistance. "We actually underestimated the benefit of isoniazid preventive therapy in this highly vulnerable population, so what this trial found was that you could do a good job of screening for tuberculosis using locally available measures and safely put patients on isoniazid," said Gupta.

The researchers also recommend that providers screen for tuberculosis symptoms at follow-up visits, also a guideline of the World Health Organization. The REMEMBER study is ongoing, with more results to come at 48 and 96 weeks. 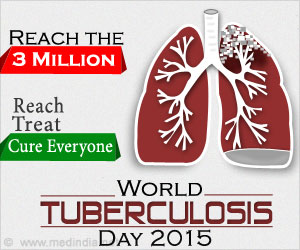