Catholics, Protestants and Orthodox Christians from across Europe gathered at Strasbourg for a 4-day gathering in an attempt to share prayers.

The 36th European meeting of the Taize community, an ecumenical monastic order in Taize in eastern France, will end on New Year's Day with prayers for the new year.

Organisers of the event said some 20,000 participants aged 17 to 35 were being given accommodation in the Strasbourg area, while another 10,000 young adults were taking part without requiring a place to stay.


Most of the visitors come from Poland, Ukraine, France, Germany and Italy.

The crowd kicked off the gathering Saturday with a multi-lingual communal prayer said in sports halls, Strasbourg Cathedral and a local Protestant church.

From the Vatican, Pope Francis sent his blessing, urging the youngsters to overcome divisions among Christians and build a European family.

"The pope shares with you the conviction that we can learn many things from each other, for the realities that unite us are numerous," the Vatican's secretary of state, Archbishop Pietro Parolin, said in a message.

Over the coming days, the young Christians will take part in prayer session as well as discuss social topics such as the economy, prostitution and the fight against discrimination.

The Taize non-denominational Christian community draws tens of thousands of young people for prayer workshops held across the year at its French base, and similar numbers at its annual gathering in a European city, traditionally held between Christmas and New Year.

Haiti's Day of Dead Sees Mix of Christianity and Voodoo
During Haiti's Day of the Dead, Haitians gathered in a Port-au-Prince cemetery to ask "the spirit of death" for any number of desires, ranging from housing to visas.
READ MORE 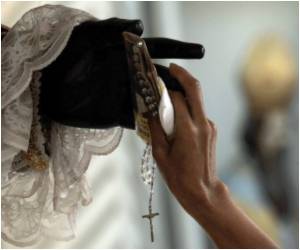