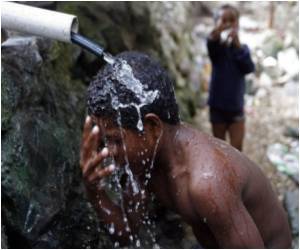 In Tanzania, some 3,000 cases of cholera have been reported. Cholera cases were seen mainly among Burundian refugees fleeing political violence, said the United Nations.

So far, 31 people have died of the water-borne disease in the area around the western Tanzanian border town Kaguna, which has been flooded with refugees, the UN refugee agency said.

All but two of those who have died were Burundian refugees, and most were children, it said.

In Kaguna, the western Tanzanian border town with Burundi, on the shores of Lake Tanganyika, over 50,000 refugees are struggling in dire conditions.

Cholera is an acute diarrheal disease that spreads as an epidemic and claims around one hundred thousand lives every year. Here's a quiz that tests how much you know about cholera!
Advertisement
"Numbers are increasing at 300 to 400 new cases per day, particularly in Kaguna and nearby areas," UNHCR spokesman Adrian Edwards said.

"At this rate, further cases can be expected over the next days and until the situation can be brought under control," he said, adding that the agency was working with the Tanzanian health ministry and other aid organisations to halt the outbreak.

The agency and its partners are struggling to move refugees from overcrowded Kaguna, situated on a narrow peninsula surrounded by a steep mountain range, to the western province of Kigoma, where the Nyanrugusu refugee camp is located.

They are being moved by ship and by bus or on foot.

While it is risky moving people with cholera, Spiegler said that due to the "horrible overcrowding" in Kaguna, aid organisations had determined more people would die if they were left there.

"We are expecting things to unfortunately get worse," he said, adding though that UNHCR hoped for a turn-around within a week.

UNHCR and its partners also launched an appeal to donors Friday for $207 million to respond to the crisis inside Burundi that has sparked the outflow of refugees.

Since early April, around 100,000 people have fled to neighbouring countries -- mainly to Tanzania -- and Edwards said estimates now show that number could double within the next six months.

The announcement came as anti-government protesters continued to march in Burundi on Friday, defying one of the heaviest pushes by police to end weeks of demonstrations.

At least two protesters were shot dead and eight wounded in clashes on Thursday with police, the Red Cross said, the latest victims of the unrest triggered by President Pierre Nkurunziza's bid for a third term, in which more than 20 people have died.

The crisis, which began in late April after the ruling party nominated Nkurunziza to stand again in the June presidential election, deepened last week when a top general staged a failed coup attempt.

More than 70,000 Burundians - most of them are women and children - have gone to Tanzania, where a cholera epidemic has so far killed 27 people.
Advertisement
Advertisement