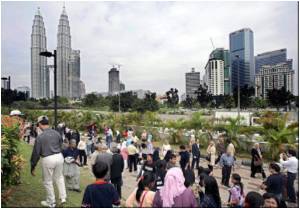 The "Young Imam" programme has seen 10 finalists hit the prime-time stage to recite verses from the Koran, wash corpses and slaughter sheep according to Islamic rules, and persuade youngsters away from sex and drugs.

A Chinese businessman chose to hold a talent contest to decide which of his five mistresses he could retain. But an eliminated contestant drove the man and her rivals off a cliff.
Advertisement


The show, which is the first of its kind, follows the reality-TV formula of shows such as "American Idol" in the US and "The X Factor" in Britain, and has ignited new enthusiasm for Islam among Muslim youth.

Patient advocates and researchers at Vanderbilt Ingram Cancer Center presented Mythbusters: Cancer Research in Jeopardy to their community in an effort to increase awareness of cancer research.
Advertisement
"I feel good. Thanks to my parents, my wife and my fellow villagers who have been supporting me," an emotional Asyraf told the studio audience of more than 1,000 at the end of the show, which was aired live over Islamic lifestyle channel Astro Oasis.

Asyraf, clad in a black long robe over a smart black suit, hugged the runner-up on stage as soon as he was declared the winner, and was "crowned" with a white Islamic skullcap as his fans cheered his victory.

Imams play a broad role in Malaysia -- where more than 60 percent of the 28 million population are Muslim -- including leading prayers at the mosque and counselling troubled individuals.

The show has become a major hit after it attracted worldwide interest while the shows' creators, who had a goal of making Islam more appealing to young people, have been thrilled by its success.

"When we talk about imams, the first impression is always someone who is old-fashioned or just does his work in the mosque," Adam Riyadz, a 21-year-old journalism student, told AFP on the sidelines of the show.

"But with this show, it is easier for me to relate to what the young imams are trying to tell us," said Adam, who travelled for two hours from another state to watch the finale with five fellow students.

The original 10 finalists, who were chosen from 1,000 candidates, have faced written and practical tests on religion each week. They had been quarantined in a mosque dormitory and banned from using phones, the Internet and television.

In the showdown, the two finalists were tested on reciting the Koran, presenting a sermon, singing religious hymns and answering questions from the programme's sole judge, a former national mosque grand imam.

"I am happy that this programme has reached the ears of people around the world," winner Asyraf told reporters.

"Our target is not just personal victory but the victory of a society and the victory of Islam itself. It has brought the youth closer to religion," he said, adding that his immediate plan was to set up a "Young Imam club".

The 26-year-old gets a trip to Mecca to perform the hajj pilgrimage, a scholarship to al-Madinah University in Saudi Arabia, and a job at a mosque.

The popularity of the show comes against a background of concern among Malaysia's ethnic Chinese and Indian minorities over rising "Islamisation" of the multicultural country and fears that tolerance towards Christians, Hindus and others is diminishing.

A dispute over the use of the world "Allah" by non-Muslims saw attacks on 11 churches and the dumping of severed pigs' heads at two mosques in January, while three women were caned for having sex out of wedlock in February -- the first such punishment under Islamic law in Malaysia.