25 Percent of Health Messages in Spanish Text Books Are Unscientific 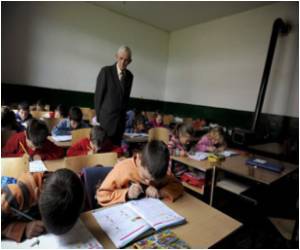 Most school text books in Spain contain messages about health, but 24.6% of these are not based on any scientific evidence, according to a study.

"We analysed a total of 844 health messages in primary and secondary school text books in order to identify the level of scientific evidence underpinning these texts, and we classified them into three categories - messages with a high, medium or low level of evidence, messages with an unknown level of evidence, and messages with no known evidence", Inés María Barrio Cantalejo, a researcher at Baza Hospital and the lead author of this study published in the journal BMC Public Health, tells SINC.

The research team compiled the information between 1 March 2006 and 1 June 2007 based on text books being used at the time in the city of Granada. Texts written in languages other than Spanish, "teachers' guides", and books not containing any health-related messages were discounted."We drew up a table to classify the messages and we recorded the data about the year and subject matter of the text book.


We identified 237 books and we manually reviewed 129 that met the previously-stated requirements. Lastly, we used 80 as a sample", explains Barrio Cantalejo. Out of all the books in the sample, 73.7% (59 books) were aimed at primary school level and contained 548 messages. The average number of messages per book was 10.6, with the highest levels of health-related content being found in books for the third year of secondary education (37%), and in terms of subject matter in Biology and Geology books (32.5%).

Booksellers face a greater struggle as the sale of electronic books and Internet sales are on rise.
Advertisement
Out of the total of 844 messages studied, 61% were classified as having an unknown level of evidence (information such as "children should not cook without an adult's help in order to avoid domestic accidents"), while 15% fell into the category where the level of scientific proof was known.However, 24.6% did not display any known evidence (such as "breathing through the nose instead of the mouth prevents colds" and "do not swim after eating, because this can affect the digestive system and you could suffer immersion syncope").

Out of the content in which the level of evidence was known, 6% was classified as having a high level of evidence, such as the statement that "children should use fluoride toothpaste when they brush their teeth"; and 7.7% with a low level, such as "alcohol consumption causes malnutrition and affects the digestive system". In addition, two messages went completely against scientific reality: "You should always rest following a muscular injury" and "wounds must be disinfected with hydrogen peroxide".

Oral health messages are most rigorous when broken down by subject area, more than 70% of the messages relating to "balanced diets and malnutrition", "food hygiene", "smoking", "sexual behaviour and AIDS" and "rest and ergonomics" were based on an unknown level of evidence. "Oral health" had the highest percentage of messages based on a high level of proof (37.5%), followed by "pregnancy and newborn babies" (35%).

"Our results suggest the need to establish standards to show teachers and the editors of school text books how to select health messages. This would make it easier for schoolchildren to acquire factual knowledge", concludes Barrio Cantalejo.

Vampire books like 'Twilight' could be changing the way teens think,scientists have revealed.
Advertisement
<< Sitagliptin Effective In Preventing Diabetes
Increased Use of Added Sugar Linked to Obesity >>

The Essence of Yoga Iron Intake Calculator Pregnancy Confirmation Calculator Drug Interaction Checker Find a Doctor Loram (2 mg) (Lorazepam) Post-Nasal Drip Turmeric Powder - Health Benefits, Uses & Side Effects Blood Donation - Recipients Accident and Trauma Care
This site uses cookies to deliver our services. By using our site, you acknowledge that you have read and understand our Cookie Policy, Privacy Policy, and our Terms of Use