14 Weeks of Parental Leave To Be Given to Norwegian Dads 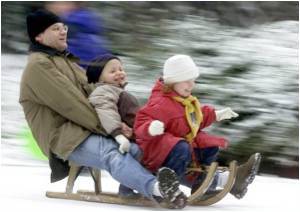 The amount of parental leave reserved for dads is to be extended to 14 weeks by Norway, bringing the period that can be claimed by both parents on full pay to 49 weeks, a coalition member party.

The Scandinavian country's system is already one of the world's most generous.

Germany Sees a "revolution" on the Home Front, Dads Apply for Parental Leave

Nearly a fifth of new German fathers have applied for parental leave benefits allowing them to stay at home on two-thirds of their pay for a year said the family ministry .
Advertisement

The move would come into effect on July 1, 2013 and is part of the Norwegian government's budget proposal that will be presented on Monday. It was revealed to tabloid Verdens Gang (VG) by Audun Lysbakken, head of the Socialist Left Party, which is a member of the country's ruling centre-left coalition.


The new rules raise the number of weeks that can be claimed by both parents within three years to 49 from 47 on full pay, up to a ceiling, and to 59 from 57 on 80 percent of the salary.

Overworked Fathers Lose a Month of Their Kids Life Each Year

The aim of the measure is to make fathers more involved in child rearing and to bridge the gender gap in the workplace.

Lysbakken's comments were confirmed to AFP by a spokesperson for Norway's Ministry of Children, Equality and Social Inclusion.

Male executives are usually unwilling to take up flexible hours and paid parental leave, sustaining a work culture that is fundamentally hostile to women, according to organisers
Advertisement
<< Preferences Sway Our Choices
Record Number of Gay Characters on US TV: Study >>