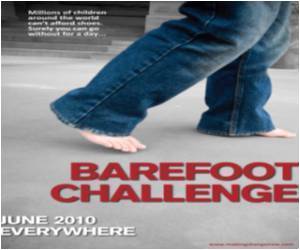 A 13 year old boy, Bilaal Rajan, has people of all ages kicking off their shoes and going barefoot in support of his latest campaign.

June 1st is International Children's Day, and Rajan is participating in an annual event he launched last year called the Barefoot Challenge, where he lives life without shoes to raise awareness about child poverty in the developing world.

Disabled children in the UK are more likely to likely to live with low-income, deprivation, debt and poor housing.
Advertisement

"I've visited countries in Africa and met with hundreds of children who walk miles every day barefoot to fetch water, work on their farm lands, or go to school," says Rajan.  "It made me think of what life would be like to live without something we take for granted."


The Toronto-based UNICEF Youth Ambassador, best-selling author, fundraiser, and social and environmental activist and is already a serious force to be reckoned with.  His best-selling book, Making Change: Tips from an Underage Overachiever (160 pages, Orca Book Publishers),is an operating manual for making a difference, no matter what your age.

All persons below poverty line (BPL) will be offered treatment for heart and kidney disease free of cost at government hospitals, the government has said.
Advertisement
Last year, the idea gained momentum across Canada and with people in countries as far away as Australia, Afghanistan, England, Switzerland, Thailand, Kenya, Malawi and Tanzania.  "In 2010, the Barefoot Challenge is going to be bigger than ever before," adds Rajan.  His school, Lakefield College School, is also taking part in the Challenge.

Since 2001, Rajan has been instrumental in raising millions of dollars for various causes.  Five years ago, he was chosen as an official Youth Ambassador for UNICEF Canada.  Rajan is asking Barefoot Challenge participants to have friends, family and neighbours sponsor them and donate the proceeds to UNICEF Canada.

"This initiative is a call to action," he says.  "And when people ask me why I don't have shoes, I'll remind them that millions of children throughout the world don't either."

Archbishop Says Condoms are an "Attractive" Way of Tackling Poverty

The Roman Catholic Archbishop of Westminster says that he can understand why contraception is seen as an attractive means of tackling Third World poverty.
Advertisement
Advertisement