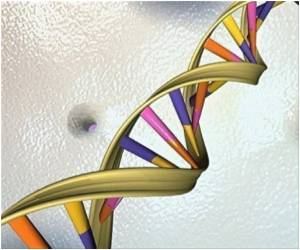 The experiments screened the so-called epigenome for key information that cells remember other than the DNA code itself and may have serious implications for preventing and treating obesity, the investigators say.

"Some of the genes we found are in regions of the genome previously suspected but not confirmed for a link to body mass index and obesity," says co-lead investigator Andrew Feinberg, M.D., M.P.H., King Fahd Professor of Molecular Medicine and director of the Center for Epigenetics at Johns Hopkins' Institute for Basic Biomedical Sciences.


Starting with DNA samples extracted from Icelanders' white blood cells banked in 1991 and 2002 by scientists there as part of the AGES-Reykjavik study of individuals in the general population, the Hopkins team used a customized, genome-wide profiling method dubbed CHARM (comprehensive high-throughput arrays for relative methylation) to look for regions that were the most variable, all chemically marked by DNA methylation.

Obesity is a condition where there is excess accumulation of body fat which poses a risk to the health of the individual. It can affect children and adults.
Advertisement
The DNA methylation analyses revealed epigenetic fingerprints, which, unique to each individual, remain stable over time and may be associated with various common traits including risks for common, complex diseases such as cancer and other conditions.

In a report on the new study the researchers reveal 227 regions within the genome where there's a great deal of variation among individuals. While 41 (about one-third) of these regions, known as VMRs, changed within each person between the 1991 and 2002 DNA analyses, 119 remained stable over time, satisfying the definition of an epigenetic fingerprint, or signature, for each person.

Curious to know if these signatures were linked to obesity-related disease, the researchers analyzed them in relation to each person's body mass index - a measure of one's weight relative to height. BMI was chosen, Feinberg says, because a high BMI predicts risk for many common diseases in the general population.

Overall, the team measured DNA methylation levels of 4.5 million selected sites genome-wide in the Iceland DNA samples that were taken 11 years apart, from 74 individuals, ultimately tracking down an array of genes associated with body mass index.

The report has been published Sept. 15 in Science Translational Medicine.

The condition is not caused by a lack of insulin, but by the action of hormones produced during pregnancy that blocks the action of insulin.
Advertisement
<< The Search for the Human Fountain Of Youth Seems to Have Yie...
Molecule Connected With Progressive Heart Failure also Lead... >>

Sanatogen A-Z Drug Brands in India Noscaphene (Noscapine) Calculate Ideal Weight for Infants Nutam (400mg) (Piracetam) Blood Pressure Calculator The Essence of Yoga Pregnancy Confirmation Calculator Selfie Addiction Calculator Color Blindness Calculator
This site uses cookies to deliver our services. By using our site, you acknowledge that you have read and understand our Cookie Policy, Privacy Policy, and our Terms of Use