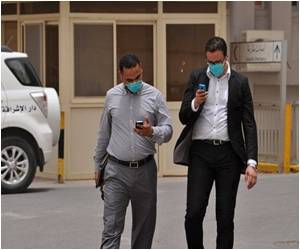 Around 12 new cases of infection by the MERS coronavirus has been confirmed by Health authorities in the United Arab Emirates, who also insisted the patients would be cured within two weeks.

The health ministry said the cases were discovered during "routine checks" on people who had contact with infected individuals, according to a statement published late Saturday by WAM state news agency.

Amid criticism faced that Saudi Arabia was not doing enough to contain the deadly MERS virus, the country has just reportedly confirmed an outbreak of the disease.
Advertisement

Those infected by the Middle East Respiratory Syndrome are kept in hospitals and "should be cured without a treatment within 10 to 14 days," the statement said.


One of six Filipino paramedics diagnosed with the disease in the eastern city of Al-Ain died earlier this month.

The World Health Organisation said Thursday that it has been informed of a total of 243 laboratory-confirmed cases of infection worldwide, including 93 deaths.

64 people in a village in Malaysia have been quarantined after one of the residents died of a respiratory illness.
Advertisement
Neighbouring Saudi Arabia remains the worst-hit country, with a total death toll of 76 people, out of 231 cases of infection.

Panic over the spread of MERS among medical staff in the western Saudi city of Jeddah this month forced the temporary closure of a hospital emergency room, prompting Health Minister Abdullah al-Rabiah to visit the facility in a bid to calm the public.

A recent study said the virus has been "extraordinarily common" in camels for at least 20 years, and may have been passed directly from the animals to humans.

Gene profiling of the MERS virus may provide valuable insights about how the microbe spreads, researchers from Britain and Saudi Arabia claim
Advertisement
<< Prince William Addicted to Hobbit, Lord of the Rings: Marti...
After Landmark Ruling, Indian Transgender Stands for Office >>

Drug Interaction Checker Daily Calorie Requirements Accident and Trauma Care Nutam (400mg) (Piracetam) Calculate Ideal Weight for Infants Drug Side Effects Calculator Blood Pressure Calculator Find a Doctor Find a Hospital Blood - Sugar Chart
This site uses cookies to deliver our services. By using our site, you acknowledge that you have read and understand our Cookie Policy, Privacy Policy, and our Terms of Use