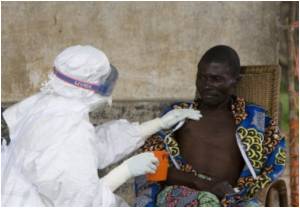 Ten people have died in an outbreak of the Ebola virus in the Democratic Republic of Congo, says the World Health Organisation.

The deaths occurred in three different locations, with the healthcare workers among eight dead in the town of Isiro in the north of the country, according to a WHO statement released Tuesday.

Bleeding disorder is an acquired or an inherited condition, which is characterized by excessive bleeding in the persons affected by the problem.
Advertisement

The outbreak struck in mid-August and comes on the heals of another Ebola outbreak -- albeit of a different strain -- in western Uganda, about 50 kilometres (30 miles) from the border with DR Congo.


Sixteen people have died from the virus in Uganda since early July, although authorities say the outbreak there has been brought under control.

Ebola is fatal in about 50 to 90 percent of cases, with victims bleeding from body orifices before dying in the most severe instances.

The rare haemorrhagic disease, named after a small river in DR Congo, killed 37 people in western Uganda in 2007 and at least 170 in the north of the country in 2000.

Blood circulates through blood vessels. In case of an injury, bleeding can occur in the organ internally or externally. Under normal circumstances, the blood vessels constrict to reduce the blood flow and a clot is formed with the help of platelets and coagulation factors present in the blood. This clotting process is impaired in people with bleeding disorders. Take this quiz to know more about bl
Advertisement
<< French Intellectuals Question Government's Goal to Eradicat...
Gullet Cancer Originated in UK in 1950s >>

Nine people have died in an outbreak of the deadly Ebola virus in the Democratic Republic of Congo, Health Minister Felix Kabangue said on Saturday.