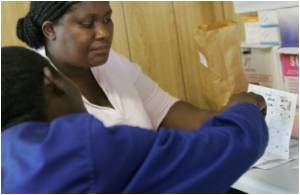 While there are 10 million people with HIV currently waiting to get treatment, there is a yawing $10 billion gap in the Global Fund to Fight AIDS, says Mr Michel Sidibe, executive director of UN AIDS.

Even as two million people die of HIV/AIDS annually across the world, there is a donor fatigue, leaving a huge gap in the funds required to fight the epidemic, he fears. But there are some heartening trends too.

Young Africans are leading are leading the AIDS prevention revolution, says a new report by the UNAIDS.
Advertisement


While talking to ABC Radio, he recounted an example from the northern part of Uganda where the health workers using AIDS money, go the village levels with a mobile phone and just finding women pregnant and bleeding and just sending a message to the reference hospital by saying that I have women bleeding here, what to do?


"And the message coming back 30 seconds later and this health worker making an injection, stopping the woman to bleed and transfer the lady to the reference centre. That's save the life of this lady, save the life of a baby.
Advertisement
"When you have this type of positive action in the remote village, is not right to break the hope of those people. We should not transform this universal hope we have been creating into universal nightmare. We need to continual this global solidarity to produce results for them."

He has been head of the UN program for over a year and has set ambitious goals. He wants all countries to aim for no new HIV infections by 2015.

"And we cannot be happy when we are seeing for any two people we are putting on treatment, we have five new infections. So I want a zero new infection. I want a zero discrimination. I want zero AIDS related deaths because I am convinced that it is this vision which will push us to make our society better."
On his way from Papua New Guinea, where it's estimated that 1 per cent of the population has HIV, Mr Sidibe told Jennifer Macey of ABC Radio, "You know I was very impressed because coming to the Pacific region I was expecting, particularly in Papua New Guinea, to see a conservative countries but I found that the effort made by certainly Australian Government over the years is paying off.

"Today I am seeing in countries which is opening themselves to major debate but also in less than five years they came from zero people on treatment, today they have almost 75 per cent of total people in need on treatment.

"The major challenge for Papua is how to deal with law reforms which can help really to protect the most at risk population, particularly the sex worker, the man having sex with man, but also how to bring prevention at the highest level."