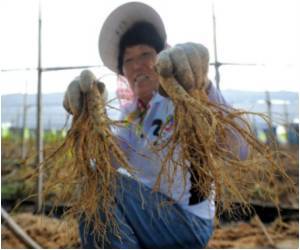 Han Myung-Ja, 52, gets very excited as she unearths a giant ginseng root with her hoe.

She fills a basket with the man-shaped root as she collects seasonal presents for family and friends -- one of dozens of people doing the same at South Korea's biggest ginseng festival.

Ginseng, which has long been used in traditional Chinese and other Asian medicine, naturally contains anti-inflammatory effects that may be used for immunological medication.
Advertisement

The herb, known to Koreans as the "root of life" for its purported health-giving properties, grows wild in deep valleys and on shaded hillsides and has also been cultivated on the peninsula for 1,500 years.


Devotees say the herb increases resistance to stress and fatigue, has an aphrodisiac quality and acts as a stimulant, although it has proved difficult scientifically to prove some of the claimed benefits.
Advertisement
Last year South Korea produced 27,460 tonnes of ginseng roots, worth about 700 million dollars including exports valued at more than 21 million dollars.

Geumsan county, 130 kilometres (81 miles) south of Seoul, is the hub of the industry. Its ginseng market operates year-round and accounts for 80 percent of all the country's trades.

Geumsan also draws almost a million visitors every year to its ginseng festival, which precedes the major holiday of Chuseok (thanksgiving) at which the root is a prized gift. The event this year runs from September 3-12.

"Our county is where ginseng was first found -- according to legend -- and ginseng here is of good quality due to the nutritious soil and the right amount of sunshine," county mayor Park Dong-Cheol told AFP.

The event involves a lot more than digging up roots. In a food competition, chefs ranging from soldiers to students are encouraged to be creative.

Among a variety of other dishes, rolls filled with ginseng and vegetables are used to decorate models of traditional Korean homes.

Casual visitors can try out various products for free, while traders haggle over large orders at a ginseng expo before signing contracts.

"We sell a lot here. I came last year and I plan to come next year as well because of the large number of visitors," said Lee Hyo-Jin, who retails ginseng jelly and snacks.

During the expo, more than 150 tonnes of ginseng products are sold daily to both locals and foreigners.

The festival also offers visitors a chance to dig for the roots, a free health examination, ginseng facial masks for beauty, massages involving a form of ginseng aromatherapy and foot baths in water flavoured by the herb.

The festival celebrated its 30th anniversary this year by opening the International Ginseng and Herb Research Institute, a 17 billion won (14 million dollar) project with 11 researchers dedicated to proving the health benefits of ginseng and honing cultivation skills.

"We plan to increase the number of researchers to up to 21 in five years and are currently preparing labs for projects," said county mayor Park.

The county says its goal is to make ginseng production scientific and easier for buyers to trace, in a bid to promote the herb more widely overseas.

"Ginseng and Koreans cannot be separated. It is our medicine and our food and we will try to show all its benefits to foreigners through this festival," said Park.

Blue cohosh is a herb used in herbal remedies that gives relief for chronic conditions like rheumatism, ...

Saint John''s Wort is a medicinal herb. It has been used for centuries to treat depression.

Shatavari or Asparagus racemosus is a popular herb aptly called the Female Health Formula. It is a very ...