A familiar aspect of a congested / stuffy / blocked nose is the inability to breathe in easily. It is an effort to get air to flow through the nasal passages. A stuffy nose occurs due to the inflammation of blood vessels in the tissues, which causes the nose to swell and results in breathing trouble. Often, Mucus is discharged continuously from the nose resulting in a runny nose. If the excess mucus flows into the throat, it results in a sore throat or cough.

Listen to this Article

A stuffy nose in babies is a problem since it is a deterrent to breathing or nursing for milk. A congested nose may affect the speech, the ears and subsequently, hearing. If one of the nasal passages gets blocked, the infant may have inserted something in that passage. Babies are also afflicted with ear pain and sinus pain when the mucus discharge blocks the eustachian tubes between the nose and the ear. It is also a discomfort for older children and adults.

There are different causes for a stuffy nose. The causes are based on either an infection, or an allergy, or health conditions. Some of the causes are: 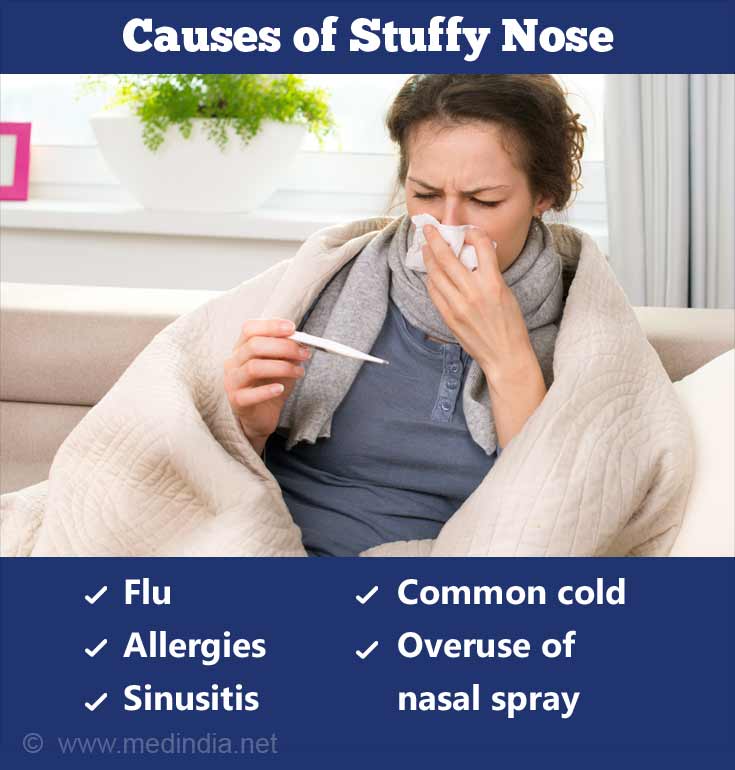 There is no treatment for a stuffy nose. The congestion in the nose subsides in due course of time. However, there are different ways to relieve a congested nose.

Raised pillow: In the case of children, the pillow should be raised to elevate the childs head and ease the discomfort of the congestion in the nose. The legs of the bed may also be raised where the head of the child is placed. When the nose is congested, it is difficult to breathe while lying down or while sleeping at night. For adults and children, sitting in an upright or elevated position eases the discomfort in breathing through a blocked nose. 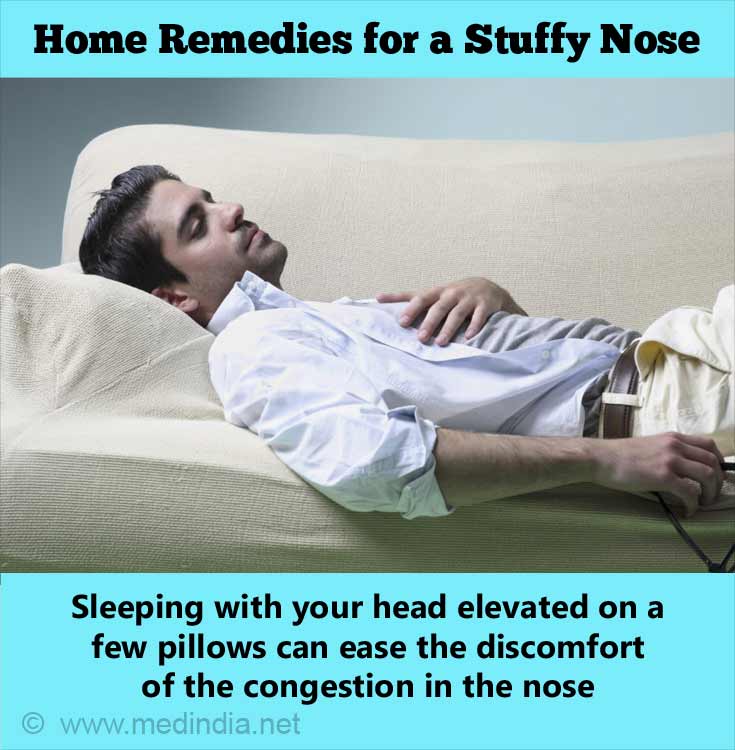 Drink a lot of fluids: Children above a year old may be given soups and other warm drinks. A teaspoon of honey may be given to treat coughing symptoms. Infants over 3 months old can be given apple juice, water or a hydrating solution. Fluids should be sugar-free.

Humidifier: In dry climates, a humidifier is recommended to moisten the nasal passages and avoid the congestion of the nose.

Steam inhalation: Inhaling steam 2 to 4 times a day helps in relieving the congestion and opens up the nasal passages for a short period of time. One can do this while in the shower. However, hot steam from boiling water should not be inhaled. One can add eucalyptus oil or menthol to the water. Traditional Chinese medicine recommends the use of menthol, moschus, and borneolum to ease the flow of air through the nasal passages. 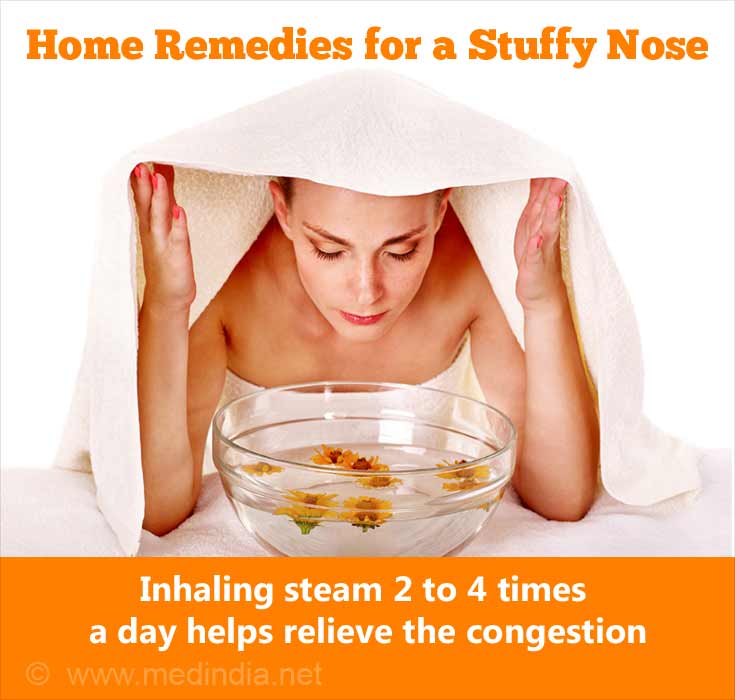 Removal of mucus: Mucus should be removed at regular intervals. Older children may be asked to blow their noses. However, an aspirator should be used for infants.

The solution should be prepared with exact measures to avoid any adverse reactions due to excess salt or baking soda.

nasal sprays can be used for 3 days continuously before discontinuing for the next 3 days. Overuse of nasal sprays is not recommended as it may worsen the symptoms. Children under the age of 2 should not use nasal sprays. However the physician may recommend certain specialized sprays for specific allergies.

Acupuncture: Allergic rhinitis can be treated with acupuncture. There have been many small studies that have observed a beneficial effect of acupuncture. However, the general efficacy of the treatment needs to be confirmed with larger sample studies. 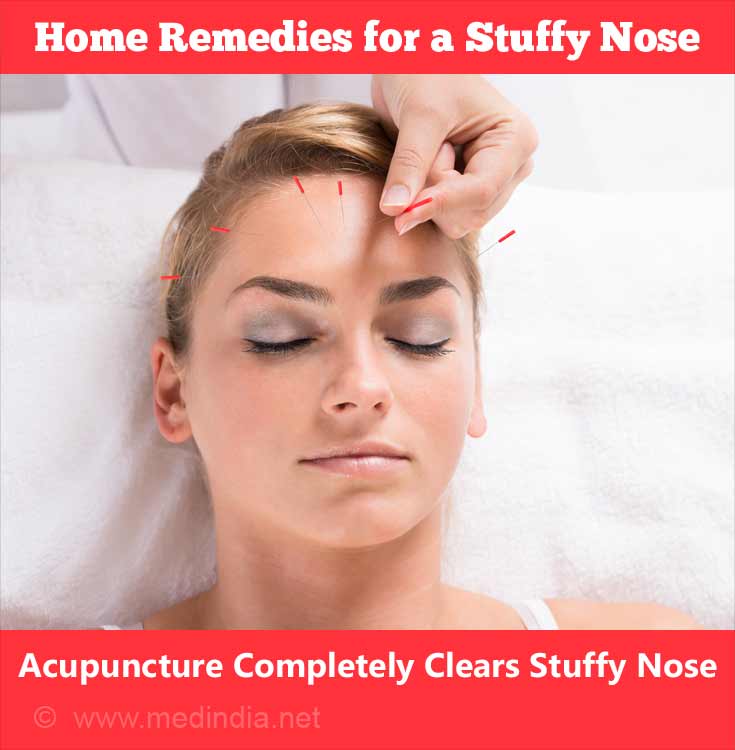 External irritants: Avoid contact with irritants such as cigarette smoke.

Antihistamines: Antihistamines can be utilized if nasal congestion occurs due to an allergy. These drugs can make an individual feel drowsy.

Decongestants: A stuffy nose can be dried up with the help of decongestants. However, the use of decongestants should be discontinued following a week if the symptoms persist and one should consult a physician.

Comments should be on the topic and should not be abusive. The editorial team reserves the right to review and moderate the comments posted on the site.
Home Remedies
View all
Advertisement
Home Remedies and Beauty Tips - Glossary
Advertisement
Complementary Medicine
What's New on Medindia

Post-Nasal Drip Hearing Loss Calculator Find a Doctor Color Blindness Calculator The Essence of Yoga Find a Hospital Sinopril (2mg) (Lacidipine) Drug Interaction Checker Blood Pressure Calculator Accident and Trauma Care
This site uses cookies to deliver our services.By using our site, you acknowledge that you have read and understand our Cookie Policy, Privacy Policy, and our Terms of Use  Ok, Got it. Close