The word snoring conjures up an image of the sounds emanating from an individual in a deep sleep at night. Light sleepers consider the noise created by snoring like a big nuisance. Habitual (persistent) snoring maybe a part of obstructive sleep apnea syndrome (OSAS). However, there are different degrees of snoring. Snoring is basically a sound created by obstructed breathing. The sound is generated when the oropharyngeal walls vibrate, and there is an alteration or obstruction in the upper airway (also referred to as upper airway patency), due to certain factors. The upper airway includes the region extending from the lips, past the nose to the vocal cords.

Snoring is produced due to the following reasons:

Simple snoring does not affect sleep. Light sleepers snore evenly throughout sleep, while heavy sleepers snore longer and louder during deep or REM sleep. The American Sleep Disorders Association has classified snoring as mild (simple), moderate (primary), and severe (upper airway respiratory syndrome - UARS) based on the position of the body, the intensity of snoring, and the level of disturbance to the roommate or spouse. In individuals with simple snoring, they do not get disturbed in their sleep. In individuals with primary snoring, they are disturbed a few times (~5 times) in their sleep. In individuals with UARS, there are increased disturbances in sleep resulting in drowsiness during the day. The snoring volume is of high intensity during the snoring episodes and is broken when the individual wakes up.

Snoring represents one end of the OSAS spectrum with the other end consisting of sleep apnea, i.e., when breathing stops or decreases for brief periods. Sleep apnea results in drowsiness during the day, risk of stroke, cardiovascular disease, and hypertension. Individuals with sleep apnea display an increased intensity in snoring. Snoring is observed in 60% of the male population and 40% of the female population in the world. 20% of children snore occasionally, while 2% of children have severe snoring issues due to a breathing disorder.

Research studies have looked into the gender differences in snoring. There are fewer cases of snoring in women compared with men. While the psychological aspect of embarrassment may prevent women from reporting snoring, on the scientific side, anatomy plays an important role in the gender difference in snoring. Alcohol consumption is a common cause of snoring in both genders. 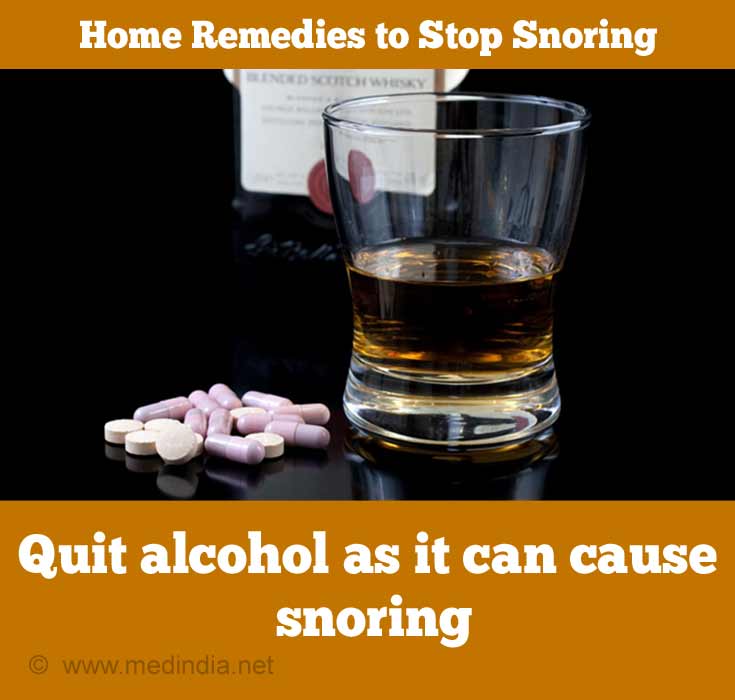 Fewer women report snoring compared with men. Some of the causes are:

Nearly 60% of the men in the world snore. Some of the causes are:

Snoring is affected by obesity, lying on the back, alcohol consumption, and obstruction in the nose.

Weight loss: It is advisable to lose weight, since there appears to be a correlation between the weight of an individual, the circumference of the neck, and snoring. However, though there is a positive decrease in snoring with weight loss, individuals find it difficult to the stick to the weight loss regimen. Surgical interventions are also hampered in an obese individual.

Sleep position: Individuals who sleep on their back, show a high frequency of snoring. Use of bolsters, special pillows, and attaching things to the back, are ways to reduce snoring. These precautions may benefit certain individuals, while others may require different interventions.

Nasal splint: In the case of a rare nasal obstruction, nasal splints aid in opening the nasal passage, and thereby reducing the volume and frequency of snoring. There are internal, reusable splints and external, disposable splints. 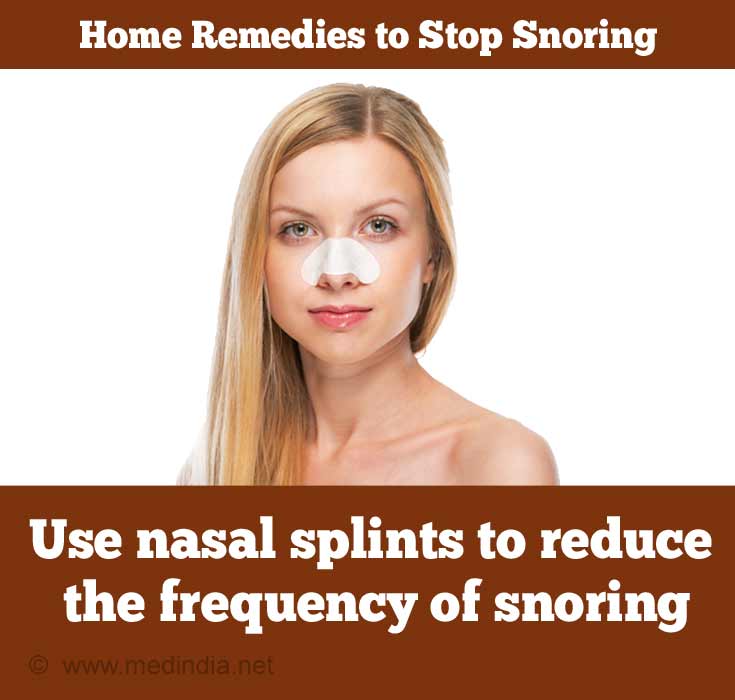 Homeopathy: Snoring may be reduced with homeopathic medications with an efficacy rate of 80%.

Aromatherapy: Marjoram oil, peppermint oil are decongestants that are applied at the base of the neck to ease air passage.

Avoid alcohol: There is increased upper airway resistance due to the sedative effect of alcohol. The muscles of the thorax relax and are not effective in controlling the movement of air through the nasal passage. The effect of alcohol on snoring is during the initial hours of sleeping and varies from individual to individual based on the dose. Hence, alcohol should be avoided or restricted in individuals susceptible to snoring.

Diet: Onions, garlic, horseradish, and thyme are useful in reducing snoring and the noise that is generated. Herbal teas and hot drinks aid in humidifying the nasal air passage. Honey added to these hot drinks coats the nasal passage and prevents excess vibration. 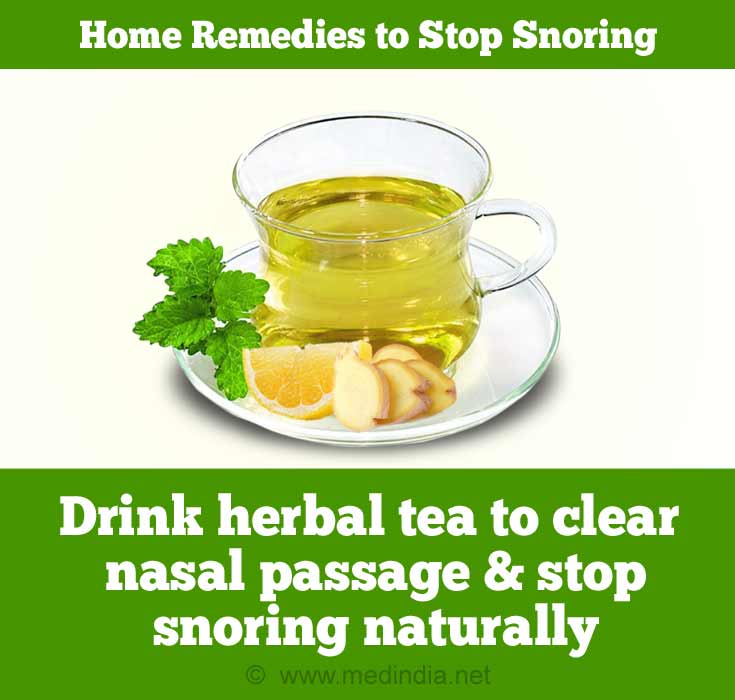 Simple, Top Ways to Stop Snoring
Snoring is the audible sound generated by air vibrations in the narrow air passage of the nose, mouth, or throat. Here are top tips to stop snoring.

Snoring
Turbulent airflow causes tissues of the nose and throat to vibrate and the noise produced by these vibrations is called snoring.

Snoring Symptom Evaluation
People, who normally do not snore, tend to do so after a bout of drinking, viral infections or after taking certain medications.

Comments should be on the topic and should not be abusive. The editorial team reserves the right to review and moderate the comments posted on the site.
Home Remedies
View all
Advertisement
Home Remedies and Beauty Tips - Glossary
Advertisement
Complementary Medicine
SNORING - Related News Sleep Quality in Children is Tied to Behavioral Development: Here's How Can a Nasal Spray Help With Sleep Apnea Treatment for Sleep Disturbances: Acupressure or Acupuncture Top 10 Reasons Why You Can't Sleep Festival of Sleep Day on 3rd January 2023 Decoding Genetics of Sleep Disorders in a New Way Worried About Snoring in Children? Try New Nasal Spray How Would Later School Start Times Affect Teenagers' Sleep Patterns? Less Sleep During Teens Increases Risk of Multiple Sclerosis Can Parental Stress Precipitate Sleep Disorders?
More News
What's New on Medindia

Quiz on Zinc
View all