Gum disease is quite simply caused because of the buildup of dental plaque on the teeth. This substance that keeps accumulating and coats the teeth contains bacteria, most of which are harmless, but there are also some that are a threat to the gums. If adequate is not maintained, these plaque deposits continue to buildup resulting in gum irritation, inflammation and gum diseases like gingivitis.

Gingivitis is a mild form of periodontal disease, which is the clinical term for gum disease. It can cause considerable discomfort because of redness, inflammation and swelling of the gums, which become tender and are likely to bleed a lot more easily.

Like many other dental health problems, gingivitis is caused due to poor dental hygiene or other factors that allow the buildup of plaque, thereby contributing to tooth decay. The condition can even progress to affect the supporting bones and tissue in what is described as severe periodontal disease. While the causes are pretty obvious, there are some risk factors that you should be aware of:

Factors like old age, malnutrition and stress can also increase your risk of gingivitis.

Almost all of us dread that visit to the dentist, but its sometimes just unavoidable. What can be even more worrying to some is the high cost of dental treatments and services. To add to that, finding a suitable dentist and managing to schedule an appointment can sometimes be a challenge in itself. If you find the costs of dentistry intimidating and are struggling with gingivitis while you wait for that appointment, it may help to try out some home remedies for gingivitis in the meantime.

Natural remedies for gingivitis can help provide relief from the symptoms and some treatments can even help to fight the problem. Many of these alternative treatments for gingivitis have been proven to be effective in studies, but the fact remains that results may vary greatly and delaying professional dental care can result in a worsening of the problem. While gingivitis is a non-destructive periodontal disease, delaying dental treatment or using ineffective methods can result in the condition progressing to periodontitis, which also affects the supporting bones and may result in tooth loss.

Here are some alternative therapies for gingivitis that you can use as preventive or supplementary treatments for the condition:

Brushing your teeth twice a day, not just the customary morning brush! This isnt just important as a method of controlling gingivitis, but its an important aspect of dental hygiene. Make it a point to brush your teeth when you wake up each morning and most importantly, before you go to bed. Brushing the teeth can be quite painful when you suffer from gingivitis as the gums are extremely sensitive and are likely to bleed very easily. Dont stop brushing because of the bleeding, instead use a brush with soft bristles. 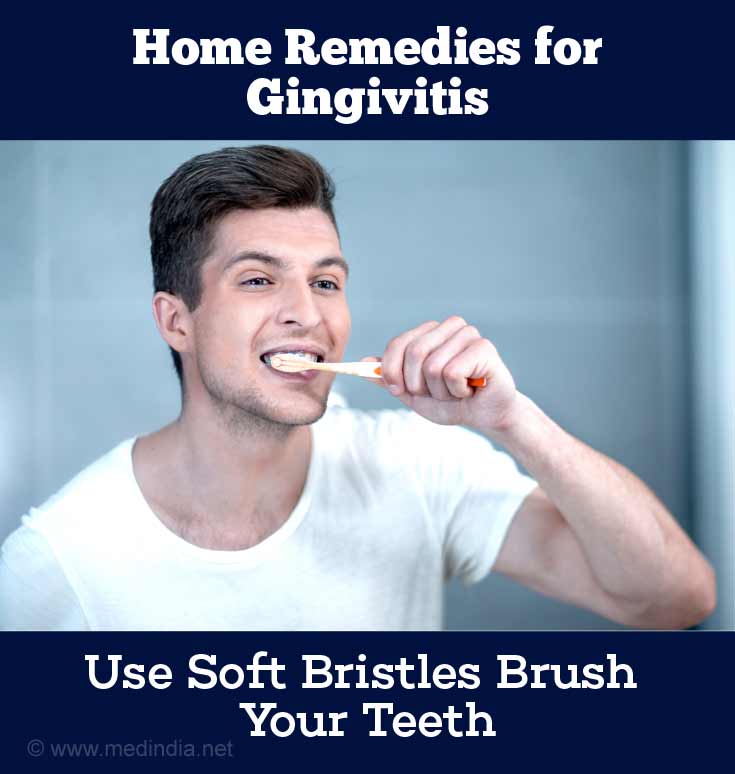 Dental hygiene doesnt end with brushing your teeth each day. A lot of people may joke about flossing, and popular sitcom characters like Alan Harper from Two and a Half Men can certainly draw a good laugh for their obsessive flossing, but it really isnt a bad habit. Flossing is probably the best and most effective way to prevent and restrict the buildup of dental plaque and tartar. This is crucial for dental hygiene and it could prevent gingivitis and other dental health issues.

Rinsing out your mouth is something you probably do instinctively after having brushed and flossed your teeth, but it is one of the most important natural methods of dental hygiene control. Instead of simply using water, try to use an antibacterial mouthwash to control bacterial activity in the mouth that contributes to the buildup of plaque and causes gingivitis. Mouthwashes that contain essential oils like peppermint and tea tree oil have been found to be extremely effective in protecting against dental decay and gum disease. Both peppermint and tea tree oil demonstrate antimicrobial properties that make them useful in the fight against gingivitis. 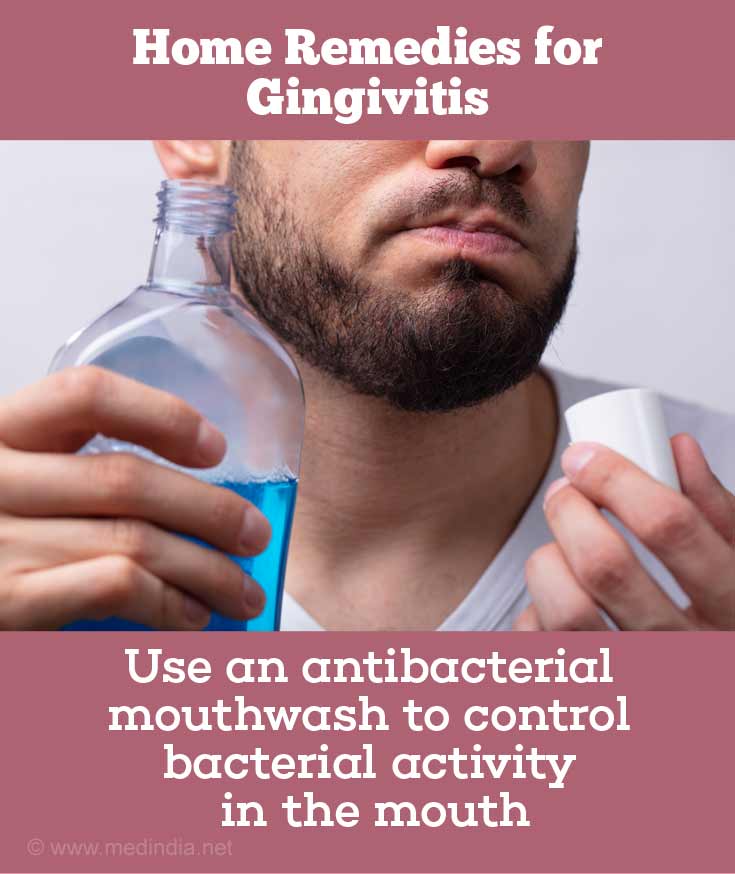 If you cant buy a mouthwash or dont have one handy, theres an excellent alternative. Theres not much chance of there being no salt in any household and that is the solution. Salt has antiseptic and antibacterial properties that make it an effective remedy for treating any kind of oral infection, including gingivitis, dental abscesses and symptoms like bleeding gums or inflammation. Salt can be used in rinses or can be applied on your toothbrush while brushing as well. It inhibits bacterial activity in the mouth and should bring about some reduction in the symptoms of gingivitis.

Turmeric is one of the most popular herbs in India and it is revered by practitioners of folk medicine. While ancient Indians may not have understood the mechanism of its working, they recognized its numerous benefits not just as a culinary condiment, but as a medicinal ingredient. Researchers today understand that curcumin, a compound present in turmeric, lends it certain anti-inflammatory and antibacterial properties, which explain why it is effective as a remedy for gingivitis. You can use turmeric powder to prepare a paste with water or an oil like mustard oil and apply it over the gums. 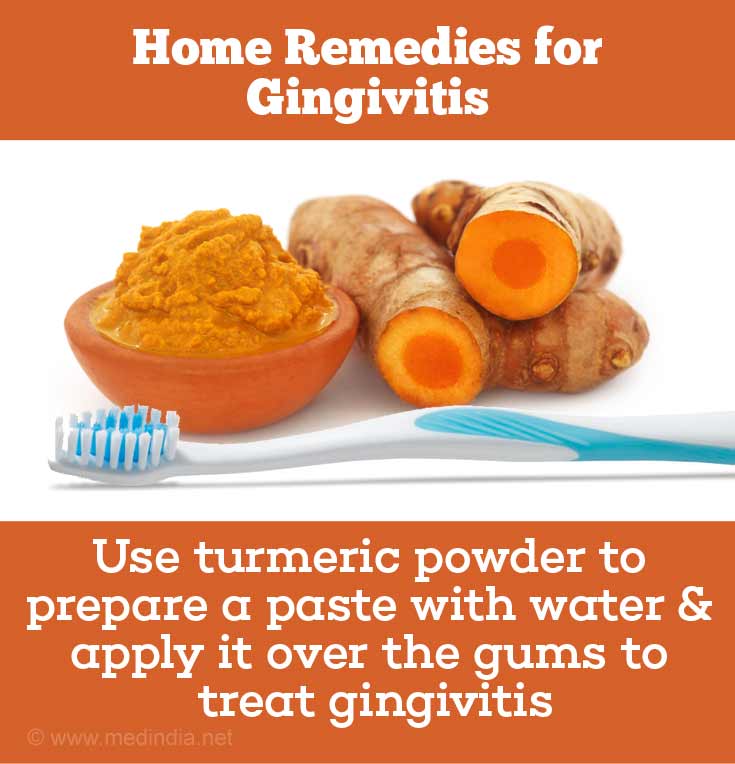 This is one natural method of treatment that you wont find touted much. It is in fact extremely effective and is a practice that is found many indigenous population's like in the aborigines in Australia and some tribal societies in India and elsewhere. Chewing sticks have been traditionally used in many parts of the world for thousands of years before the invention of the toothbrush!

Researchers today suggest that this practice can actually be just as effective, if not more effective, than using a toothbrush. Indigenous communities with their inherited knowledge of the natural world select and prepare chewing sticks from specific twigs, stems or roots of various species of plants. Studies suggest that some of the benefits of oral care with chewing sticks may also derive from the antimicrobial substances that protect the plants. In other words, those same properties that protect the plant from invading parasites also leech into the oral cavity and protect you from bacteria that cause dental caries and periodontitis.

Ginger is renowned for its antibacterial and antifungal properties but there is little evidence to support its use as a treatment for gingivitis. Nevertheless, many natural health enthusiasts claim that ginger or ginger extracts and ginger juice can help to relieve the symptoms of inflammation and pain associated with the condition. 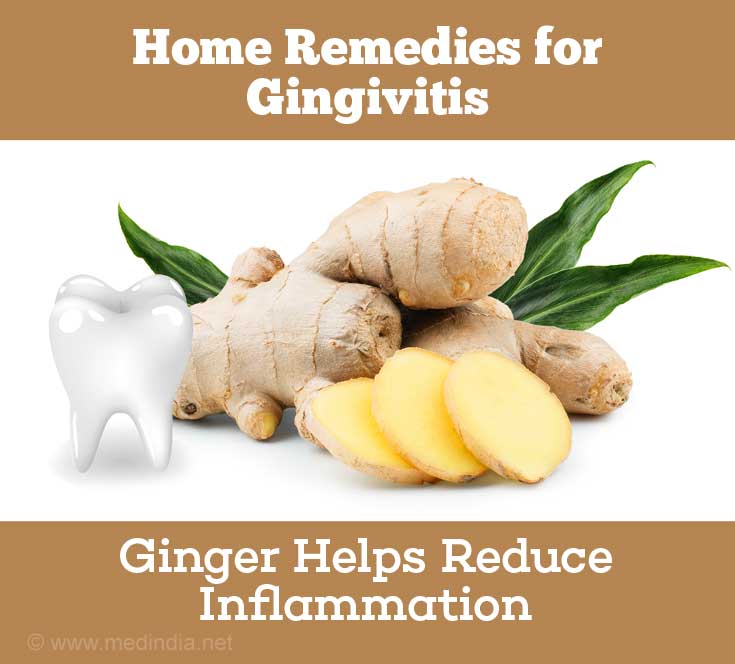 Honey has long been popular as a remedy for various health conditions and in recent years the medical establishment has been rediscovering the healing power of honey. In addition to its use as a treatment for skin infections, wounds and burns, research points at honey being an effective treatment for periodontal disease, mouth ulcers and other oral health problems. Honey has also been found to be extremely effective as a natural remedy to prevent dental caries and gingivitis. You can simply apply honey onto your gums or rinse your mouth with a honey solution.

Sodium bicarbonate or baking soda is one of the most effective agents for the maintenance of oral hygiene. Baking soda is to be found in almost every kitchen and its also extremely cheap, making this a very popular remedy. Baking soda can be used as dentifrice when brushing your teeth and you could even mix it with some salt.

Several studies have shown that baking soda containing dentifrices show greater effectiveness in dental plaque removal. This is especially noteworthy as it goes beyond preventing plaque buildup, but it can even help get rid of plaque to some extent. Baking soda isnt a magic cure: however, it wont prevent dental caries, but using it from time will certainly help improve your oral health and could prevent the onset of gingivitis.

Cloves and clove extracts like clove oil are among the most widely used of all-natural ingredients in oral care preparations, with most toothpaste brands also using cloves as an essential ingredient. Cloves have been popular in traditional medicine with ancient texts celebrating the medicinal value of the clove and its oil.

Scientific studies have supported these claims and have found that cloves contain strong antiseptic, anti-inflammatory and analgesic properties that make it an effective home remedy for toothaches, gingivitis and other oral health issues. You can simply chew on a few cloves or apply some clove oil to the gums if you suffer from gingivitis. 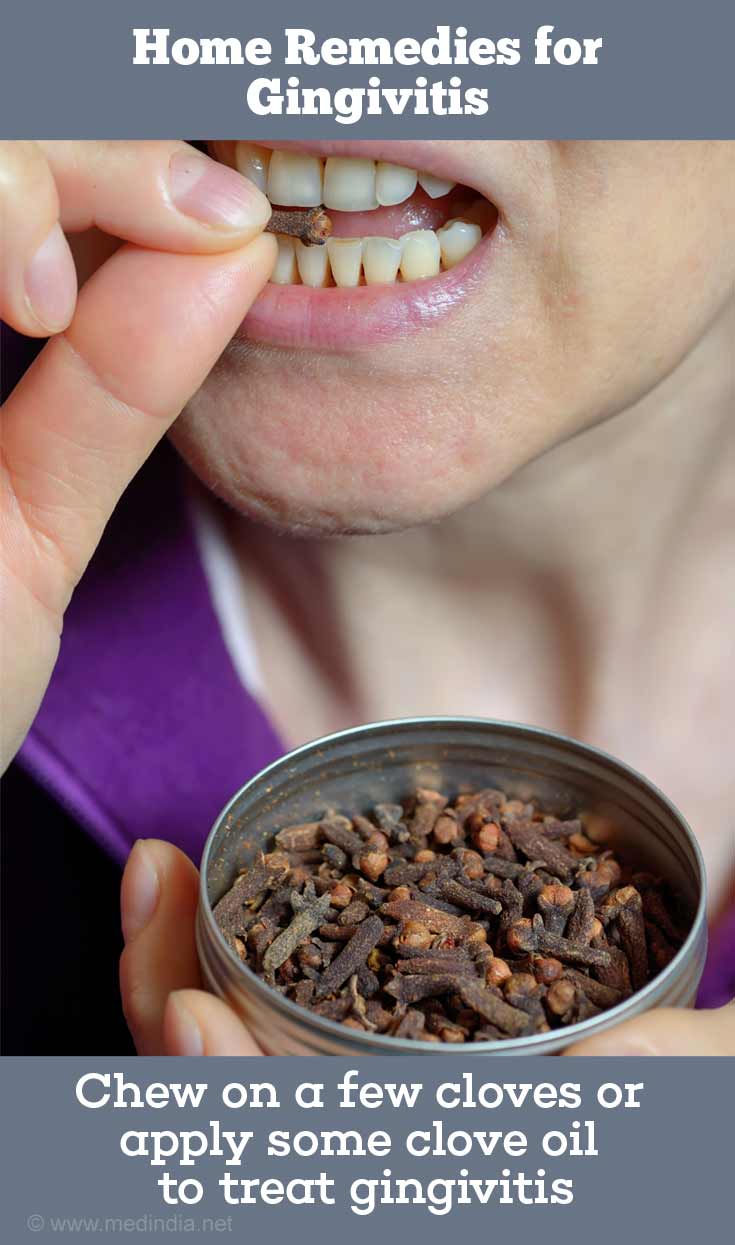 Toothache
A toothache is a pain in or around a tooth that occurs due to various reasons that irritate the nerve supplied to tooth. Though Toothache is not life-threatening, it can get worse if left untreated.

Tooth Cavity Bacteria can be Fatal for Your Heart
Scientists discovered how the cavity-causing microbes present in the mouth invades the heart tissue and causes lethal infection endocarditis.

Quiz on Dental Care
Dental care is an important part of a person's grooming and overall health. This quiz attempts to inform you about dental cavities and decays and also hopes to enlighten you with tips on safe guarding dental health which is primary to your well ...

Periodontitis
Periodontitis or pyorrhea is infection and inflammation of ligament tissues that surround and support the teeth. Periodontitis causes loss of alveolar bones leading to loosening and loss of teeth.

Comments should be on the topic and should not be abusive. The editorial team reserves the right to review and moderate the comments posted on the site.
Home Remedies
View all
Advertisement
Home Remedies and Beauty Tips - Glossary
Advertisement
Complementary Medicine
What's New on Medindia