What is Chest Congestion?

Any case of chest congestion should be first diagnosed by a doctor to rule out a serious cause. In addition, the doctor should be informed if you are taking herbal remedies so that they do not interfere with your medical treatment.

Chest congestion and cough are mutually related because coughing is a reflex action which is meant to expel the secretions in the form of phlegm. Chest congestion is associated with symptoms such as runny nose and difficulty in breathing. Congestion of the lungs could be due to a more serious condition and should be treated by a specialist on an urgent basis.

What are the Causes of Chest Congestion?

Chest congestion due to bronchitis may be caused due to many factors such as infection, or irritation from fumes, dust or pollutants in the environment. There are various risk factors, which may lead to chest congestion such as smoking, reduced immunity or pre-existing condition of asthma.

There are many herbal remedies for chest congestion which have been effectively used since ages. These include the use of a wide range of herbs such as angelica, anise, parsley, myrrh, hyssop, and chamomile and spices such as cardamom, cinnamon, cayenne pepper, garlic, lime and ginger.

Added to this, tea and coffee have also been successfully used as home remedies to offer chest congestion relief. But among the simplest remedies is warm water. Drink plenty of warm water to thin out the mucus. Steaming is also a good option to relieve nasal congestion and other symptoms of chest congestion.

As an important item of herbal remedies for chest congestion, anise has been widely used in the treatment of influenza, sinusitis and various other respiratory problems. The effective ingredient present in anise is creosol which is an essential oil and helps in loosening the bronchial secretions. Anise can be used in a diffuser or as a massage oil. It is easily available as an over-the-counter medicine for chest congestion.

Anise has expectorant and has antibacterial properties, and aids in soothing the throat. Therefore, it is an important constituent of several cough syrups and lozenges. 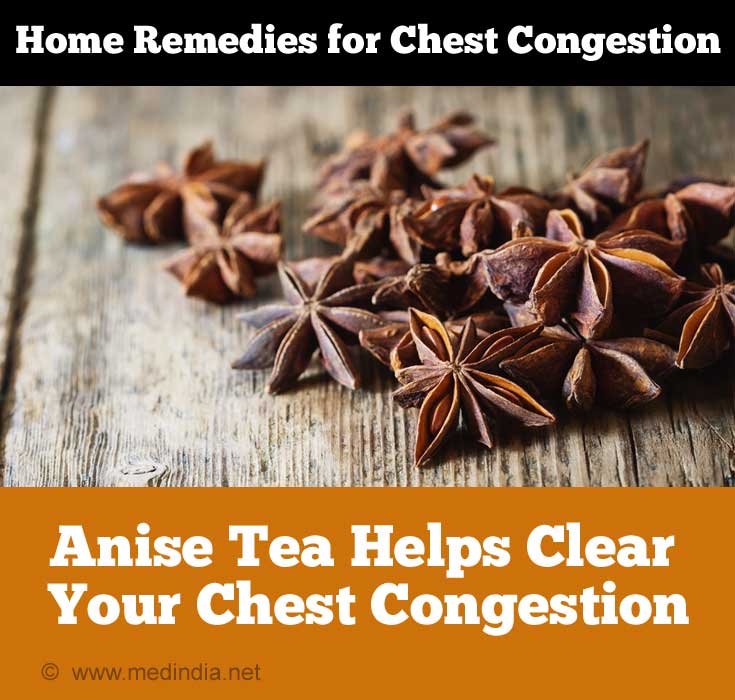 Camphor is an essential ingredient in various products that are applied locally and is available as an over-the-counter medicine for chest congestion. It is found in a large number of balms and rubs used as effective chest cold remedies. It has anti-inflammatory action and also helps in soothing aches associated with congestion.

An important ingredient of many cold rubs and balms, eucalyptus is another great herbal remedy for chest congestion. It acts as a decongestant, facilitating the opening of blocked airways and relieving body ache associated with cold.

Garlic is a natural herbal remedy for chest congestion and sore throat. It has anti-inflammatory and antiviral properties which work towards eliminating viral and preventing bacterial infections. It also provides chest congestion relief by clearing the airways and decreasing the production of mucus.

Garlic contains quercetin which works by inhibiting the activity of enzyme lipoxygenase. This enzyme plays an instrumental role in releasing inflammatory chemicals and hence, garlic brings about chest congestion relief. Garlic can either be eaten raw before sleeping or added to food recipes. 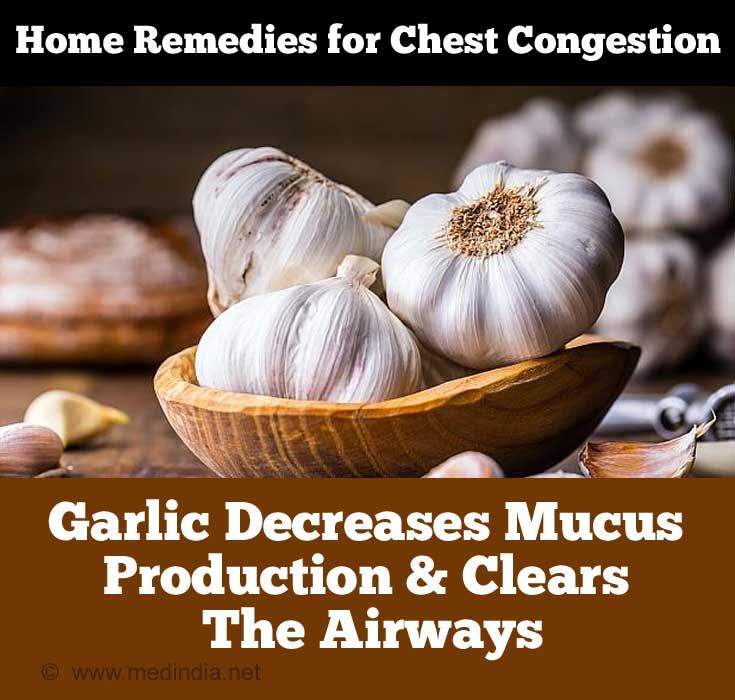 Ginger is one of the best herbal remedies for chest congestion and is armed with anti-inflammatory, antibacterial and antiviral properties. It offers good chest congestion relief by loosening the phlegm in the nasal passages. The best way to take ginger as a home remedy is to boil one fresh ginger in water, drain and cool the liquid to room temperature. Daily intake of this ginger-infused water can bring significant beneficial effects and help you to breathe easily.

The citric acid present in lemons is antibacterial in nature and helps in warding off infections. Lemons help in eliminating the mucus from the chest and also soothe the throat, thus bringing down both chest congestion and cough. The vitamin C in lemons may also help to increase immunity against infections.

Use lemon in home remedies by cutting one lemon in half and squeezing its juice in a glass of water. This should be taken daily until the congestion is relieved.

Thyme is a popular culinary herb and finds traditional use in the treatment of spasmodic coughs. It has been given in the form of flower and leaf infusion in honey to patients with bronchitis, cough, sore throat and congestion. It provides an excellent effect on chest congestion and coughing fits because it possesses antispasmodic and expectorant properties. It has been reported that syrup containing thyme herb and ivy leaves is extremely effective in treating bronchitis.

The chemical thymol present in thyme is the main factor contributing the antispasmodic and antibacterial properties to the herb. Added to this, there is no known drug-herb interaction associated with thyme. 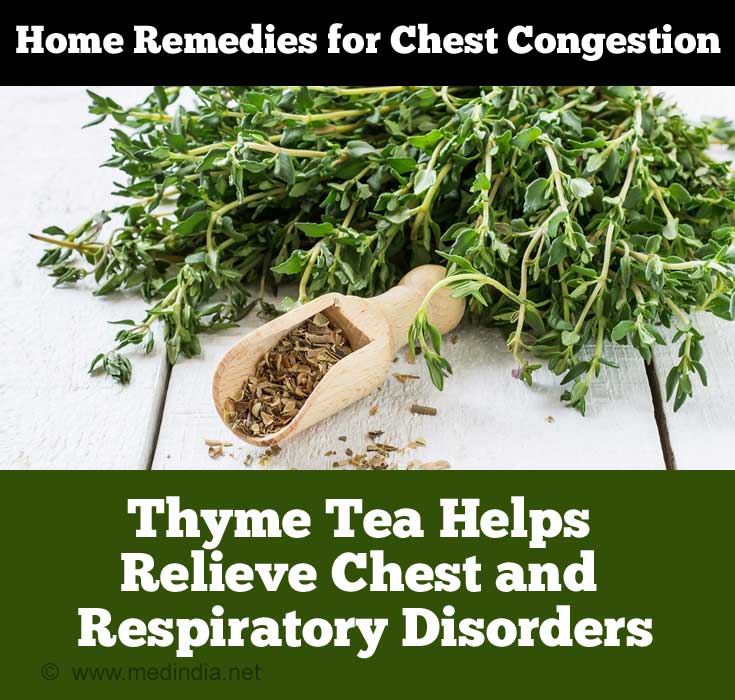 A tablespoon of honey in warm water soothes the throat and helps relieve the congestion. Honey should be avoided in small children due to the risk of botulinum toxicity.

Tulsi has been studied to have immunomodulatory properties along with antitussive and expectorant properties. Hence, it acts as a great herbal remedy for chest congestion and cough. It reduces the amount of cough as well as assists in eliminating the phlegm from the chest, thereby relieving congestion. It also has antibacterial and antifungal properties and helps in overcoming the infection causing respiratory problems. Chemicals such as camphene, eugenol and cineole present in it are the main factors for its property of providing chest congestion relief. It is also armed with anti-inflammatory and anti-allergic properties, which help it in curing respiratory disorders with allergic etiology.

Tea is one of the most common chest cold remedies and its manifold advantages have also been acknowledged by the FDA. Theobromine and theophylline are the chemical ingredients present in tea, which enable tea to be used as one of the chest congestion remedies. These ingredients assist in expanding the airways, enhance the heart rate, improve and increase the blood flow, and prevent bronchospasm. Herb-infused tea is a great herbal remedy for bronchial congestion providing a plethora of health benefits.

Peppermint tea is an important herbal remedy for chest congestion since it contains menthol which has been studied to be effective in soothing afflicted chest and throat. It provides chest congestion relief by thinning out the mucus and helping in breathing easily. 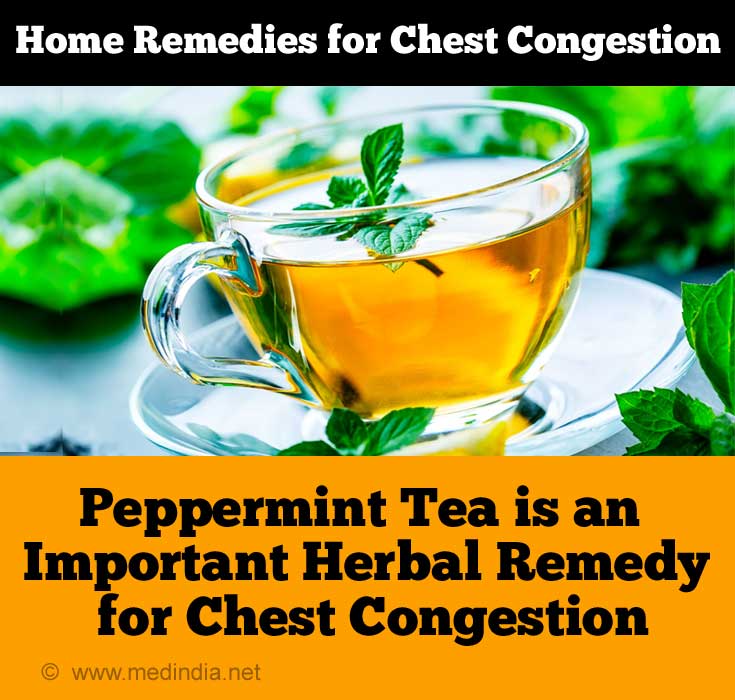 Turmeric is popularly known as haridra in Ayurveda and constitutes an important part of Ayurvedic medicine. The chemicals such as turmerones, curcuminoids, curcumin and tetrahydrocurcumin present in turmeric impart antiasthmatic and decongestant properties to turmeric. Fresh juice of the rhizome is administered in bronchitis. Turmeric is boiled in milk and mixed with jaggery and given orally to treat rhinitis, chest congestion and cough. It is also given in the form of fumes in case of congestion or asthma.

Chest congestion in toddlers is a common problem and is often treated with home remedies. However, it is necessary to get an okay from your pediatrician before you try any of the herbal remedies in your child.
Published on Jun 23, 2015
Last Updated on Jul 23, 2019 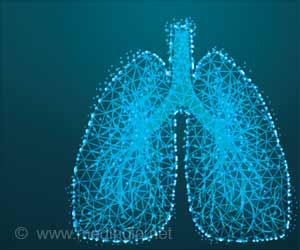 New Technology Helps Diagnose Respiratory Diseases
A new radical non-invasive technology that can be used to diagnose respiratory lung diseases, such as cystic fibrosis and lung cancer, and potentially fast-track treatments for patients has been developed by scientists.
READ MORE