Compiled by Vaishali, B.E
Medically Reviewed by The Medindia Medical Review Team on May 08, 2014

Diabetes, also popularly referred to as 'high blood sugar' is a metabolic disorder in which the pancreas does not properly produce insulin or the cells are unable to use the available insulin. Insulin is a hormone that is needed for daily life to convert sugar, starches and other food into energy needed for our body. Factors such as genetic, environmental, obesity and lack of exercise appear to play major roles in causing diabetes.
Key Facts about Diabetes


 Diabetes is the 5th most common cause for death in the world.

 In 2005, 1.1 million people died due to diabetes. Although people may live for years with diabetes, their cause of death is often recorded as heart diseases or kidney failure because diabetes impacts the whole body.

 The number of people with type 2 diabetes is highly increasing in every country.

 Type 2 diabetes is more common than type 1 diabetes, and accounts for around 90% of all diabetes worldwide.

 45 percent of children with newly diagnosed diabetes have Type 2 diabetes and most are overweight or obese at diagnosis. This means that Type 2 is not only treatable, but also preventable, with proper diet andv healthy lifestyle.

 Women with diabetes are more likely to develop vaginal infections due to their high glucose level. Also it impacts estrogen levels, menstrual and ovulation cycles, and sexual desire.

 Clinical research found that babies who were breastfed for more than three months had a lower incidence of Type 1 diabetes and also less likely to become obese as adults.

 Researchers found that watching television for more than two hours, was associated with 14% increase in diabetes risk.

 The number of people living with diabetes is greatly increasing in low- and middle-income countries (80%).

 Most people living with diabetes now are between 40 and 59 years of age.

 Nearly 10% of the entire U.S. population has diabetes, including over 25% of seniors. If present trends continue, 1 in 3 American adults will have diabetes in 2050

 The World Health Organization (WHO) reports that diabetes has reached extreme proportions and expects that 80% of all new cases of diabetes will appear in developing countries by 2025.
References:

Diabetes Increases Death After Heart Attack
Diabetes may double the risk of death after heart attack, suggests study conducted at the University of Iowa.
READ MORE 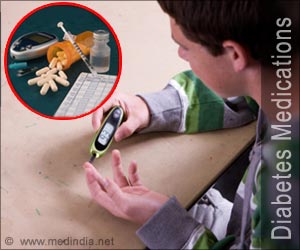 Quiz on Diabetes Medications
How much do you know about the medications used to treat diabetes? Here are a few questions you could attempt to test your ...
READ MORE
Quiz on Blood sugar
Take this 10 question knowledge quiz on blood sugar - the main source of energy for the trillions of cells of our ...
READ MORE

Yoga For Ailments - Obesity, Diabetes, Backache, Rheumatism, Arthritis, Constipation
Know all about the Yoga For Ailments, the classic ancient system of India, and how it flourished under various civilizations
READ MORE