Tuberculosis is a major health care problem in the developing world. According to the WHO, a total of 9,400,000 new cases were diagnosed throughout the world in 2010. 30% of these cases were diagnosed in Africa whereas 35% were detected in South East Asia. The disease resulted in 1,300,000 deaths in 2010. People with decreased immunity are particularly susceptible, especially those with HIV. Resistance to anti-tuberculosis treatment also adds to the problem. 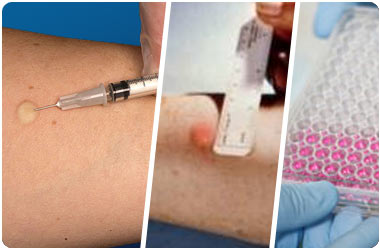 Who should undergo screening for tuberculosis?

People at high risk of contacting tuberculosis are advised to undergo screening for the disease. These include:

Which tests are used for screening for tuberculosis?

Tuberculin Skin Test (TST): Tuberculin skin test is also called as the Mantoux test, Pirquet test or the PPD test. In this test, a small test dose is injected between the layers of the skin (intrdermally) and the area is marked. After 48 to 72 hours, the area is checked for any induration (hard swelling).

Interferon - Release Assays: These are blood tests used to detect tuberculosis. When the blood of patients is incubated with certain proteins of TB bacteria, the immune cells from the patients blood release a substance called interferon. This is detected during these tests. Tests that are commercially available include the QuantiFERON  TB Gold, QuantiFERON-TB Gold In-Tube test (QFT-GIT) and T.SPOT.TB test.

False positive reactions in patients with BCG vaccination or with infections caused by non tubercular mycobacteria are less likely to occur with these tests.

These tests require less frequent visits to the hospital and results are available within 24 hours.

They do not require measurement of skin induration, which could be highly subjective and lead to errors.

They are highly specific for tuberculosis. In addition, they do not boost responses to subsequent tests. These tests may not be preferred in children less than 5 years. They are also more expensive.

1. When should I call a doctor?

A consultation with your physician or tuberculosis specialist is advised if the results of the above tests come as abnormal.

2. What is meant by false positive and false negative test?

3. Which of the above test is preferred?

The blood tests are preferred over the tuberculin test. However, they are expensive and may not be feasible to be carried out on a large number of people especially in the underdeveloped countries. They should also not be conducted in children less than 5 years.

4. My tuberculin test shows a red area but no induration. Is it positive?

No. Induration is necessary to read the test as positive.

Latest Publications and Research on Screening Tests for Tuberculosis

Controlling Tuberculosis -The Indian Chapter
India aims to bring down the prevalence of TB by 50 per cent by 2015 and to completely eradicate it by 2050.

The Respiratory system
What happens when you Breathe? Learn about Respiratory System and process of respiration

Sputum Test
Pulmonary tuberculosis is caused by Mycobacterium tuberculosis.It primarily involves lungs and extend to other parts of the body.