Chlamydial infection may not cause any symptoms initially, though it may be associated with serious complications like infertility and ectopic pregnancy in later stages.

Chlamydial infection is a caused by a bacterium called Chlamydia trachomatis. It affects men as well as women. 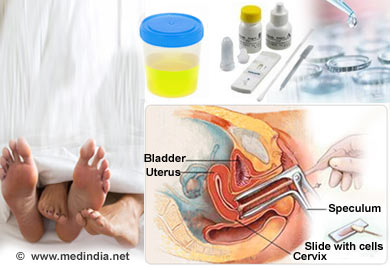 In women, chlamydial infection usually affects the lower tubular part of the uterus referred to as the cervix and usually spares the vagina. Symptoms may be absent in the initial stages. Chlamydial infection may cause an increase in odorless vaginal discharge with or without itching. The cervix may appear inflamed and may bleed easily when examined with a swab or a spatula.

The infection may spread upwards to affect the inner lining of the uterus, a condition called endometritis. If the fallopian tubes are affected, the condition is called salpingitis. Endometritis and salpingitis result in a condition called pelvic inflammatory disease. Symptoms of pelvic inflammatory disease include severe abdominal pain, high fever, pain during intercourse, prolonged menses, and bleeding between menstrual periods. Pelvic inflammatory disease can result in infertility, chronic pelvic pain and ectopic pregnancy (pregnancy occurring outside the uterus, usually in the fallopian tubes). These complications make it very important to diagnose the condition in high-risk women preferably before the onset of any symptoms.

Chlamydial infection can also affect the urethra or the lower part of the bladder through which the urine is excreted, the condition being called urethritis. The patient experiences pain during urination.

Chlamydial infection may rarely cause a condition called Reiters syndrome which is characterized by arthritis, conjunctivitis (inflammation of the outer lining of eyes) and urethritis. This condition affects men more often than women.

Why is screening for chlamydial infection important?

Screening for chlamydial infection is important for the following reasons:

Thus, screening is important to detect and treat the infection in its early stages before the onset of any complications. In addition, screening also helps to reduce sexual transmission of the infection.

Who should undergo screening for chlamydial infection?

Current guidelines indicate that screening for chlamydial infection should be carried out in the following nonpregnant as well as pregnant women:

Routine screening is not necessary in women over the age of 25 years not involved in high-risk sexual behavior.

How often should tests for Chlamydia infection be repeated?

Screening for chlamydial infection in women at high risk for developing the infection should preferably be repeated every year.

Which are the preferred tests for detecting chlamydial infections?

Tests for chlamydial infection may be carried out on cervical swabs or urine samples in woman, or on urine samples or urethral swabs from men.

Some of these tests may be less sensitive when conducted on urine as compared to cervical swab.

1. Which doctor should I visit to get a test for chlamydial infection done?

You should visit your gynecologist or venereal disease specialist to get tested for chlamydial infection. In some cases, your general physician may also conduct the test.

2. When should a woman stop screening for chlamydial infection?

3. What are the other tests used to diagnose chlamydial infection?

Other tests used to diagnose chlamydial infections are:

4. What happens if the test result is positive for chlamydial infection?

If the screening test is positive for chlamydial infection, you could either receive treatment with antibiotics or reconfirm the result using an alternative test.

Urologists Blamed for Rise in Chlamydia Among Young Men Urologists are failing to pick up and treat Chlamydia infection in young men, say UK researchers.

Chlamydia Cases Double Over Decade In Denmark Denmark health officials were worried as the nation sees doubling of cases of the venereal disease chlamydia over the past decade.

Female Condom - Animation Animation on how to use Female condom and its advantages.