Interaction of Quetiapine with Food, Herbs and Alcohol - For your own safety It is important to understand and avoid the drug-food interaction and how to take the medication. Drug-food interaction can sometimes cause side effects and can even reduce the efficacy of the drug.

Quetiapine Interactions with Food and Herbs

Grapefruit: Quetiapine interacts with grapefruit. Grapefruit blocks the metabolizing enzyme of the drug, thereby possibly increasing its blood levels.
St.John's Wort: The combined use of quetiapine with St. John's wort may lead to lowering of quetiapine blood level which decreases the effectiveness of the drug.

Don't consume alcohol while taking quetiapine as it will alter the effectiveness of the drug and may worsen the side effects such as dizziness and drowsiness.

How to Take the Medication -

You can take quetiapine directly by mouth with food or on an empty stomach. Strictly follow the dose and the instructions given on the leaflet. Consult your doctor before changing the dose, and don't stop the use of the medicine suddenly even if you feel good. 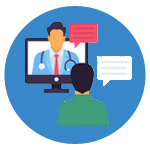 CONSULT ONLINE WITH A DOCTOR