Ginseng derives its name from the Chinese word 'Ren Shen' which means 'man root'. Botanically it is known as Panaxquinquefolium. Ginseng is a traditional herb which is popularly known for its ability to maintain viability as well as sustain longevity.

It is believed that ginseng has the ability to heal all aspects of the body. It is a valuable medicinal herb used particularly in China, Japan and Korea. The most common ginsengs are American ginseng, Chinese ginseng and Korean ginseng.

The health advantages of ginseng are attributed to the presence of healthy compounds in it such as:

Furthermore, ginseng is a good source of minerals such as calcium, potassium, thallium, iron, manganese, copper, strontium and zinc.

Thirty-one different types of ginsenosides have been isolated from ginseng and each one has an amazing medicinal property.

Recently, ginseng has achieved popularity all around the globe. The roots of ginseng are used to revitalize the mind and body, enhance the physical strength and vigor. It is called the 'king of all herbs' because it has a solution for every disease or disorder. Let's get down to the health benefits of ginseng:

Ginsenoside present in ginseng improves the uptake of glucose by the muscles. Thus, less glucose is present in the blood and more of it is used as a source of energy for the body. It further increases the secretion of insulin and helps in normalizing blood glucose levels. 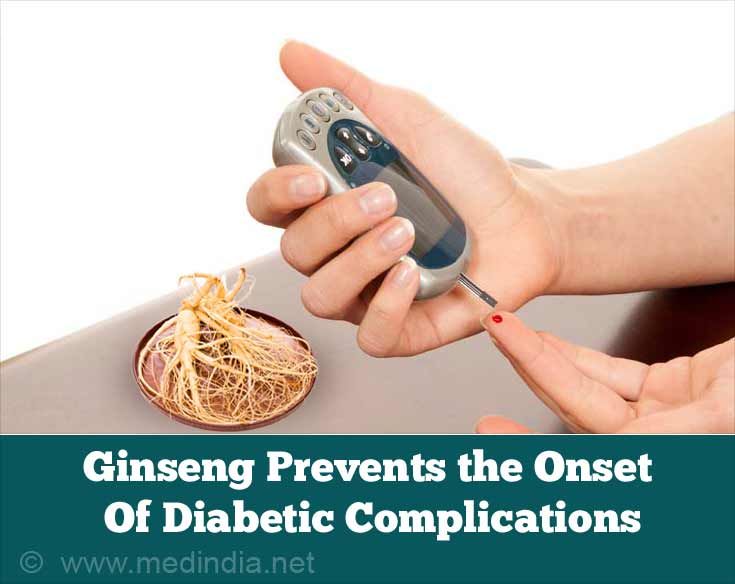 Research has revealed that ginseng protects the heart tissues against damage and prevents heart failure. It helps in the management of diabetes mellitus, high cholesterol levels and high blood pressure, which are the risk factors for heart disease.

Ginseng also protects the heart against free radical damage and lowers the level of oxidative stress.

Ginsenosides present in ginseng stimulates the release of nitric oxide which in turn causes relaxation of arteries and widening of blood vessels. Such an action ensures smooth blood flow all throughout the body without putting any load or stress on the heart. Ginseng further protects the inner lining of the heart and prevents damage.

Ginseng is a powerful anti-aging agent. Continuous exposure of skin to ultraviolet rays (UVR) can generate free radicals. Collagen is a protein present in the skin which is responsible for the strength, elasticity and smoothness of the skin.

UVR affect the skin collagen and it disrupts the antioxidant defense system of the skin, initiating the process of aging.

Ginseng supports skin rejuvenation by reducing oxidative stress. It further reduces the free radical attack and protects the collagen. Ginseng also inhibits the formation of wrinkles and hydrates the skin. 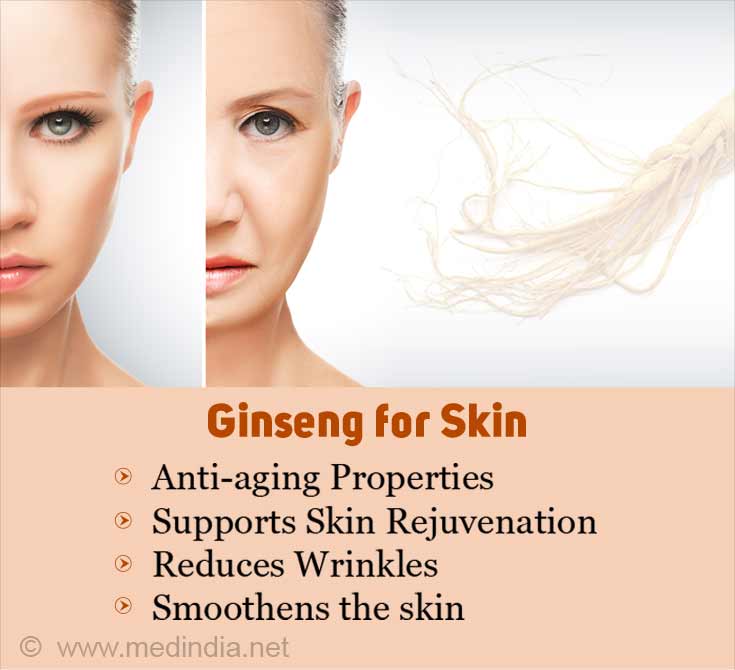 Research has revealed that Korean red ginseng improves cognitive function in individuals with Alzheimer's disease. Ginsenoside enhances memory and learning and increases the survival rate of brain cells. It further protects the brain cells from attack by the free radicals.

Ginseng also aids in the transmission of signals and messages from brain to other parts of the body whereas, during Alzheimer's disease such a transmission is affected due to damage to brain cells.

In traditional Chinese medical practice, ginseng acts as an aphrodisiac. It is used to treat sexual dysfunction and it enhances sexual behavior. In men, ginseng boosts the quality of sperms, as well as, sperm count. Such an action is attributed to the presence of ginsenosides in ginseng.

Furthermore, studies have observed that ginseng helps in the treatment of erectile dysfunction when consumed thrice a day for 2 to 3 months.

Ginseng promotes the production and release of nitric oxide which helps the muscles to relax. This allows the blood to enter the erectile bodies, thus causing erection.

Besides this, treatment with ginseng increases the release of testosterone (male sex hormone).

Prolonged exposure to environmental toxins can cause a decline in the fertility levels. 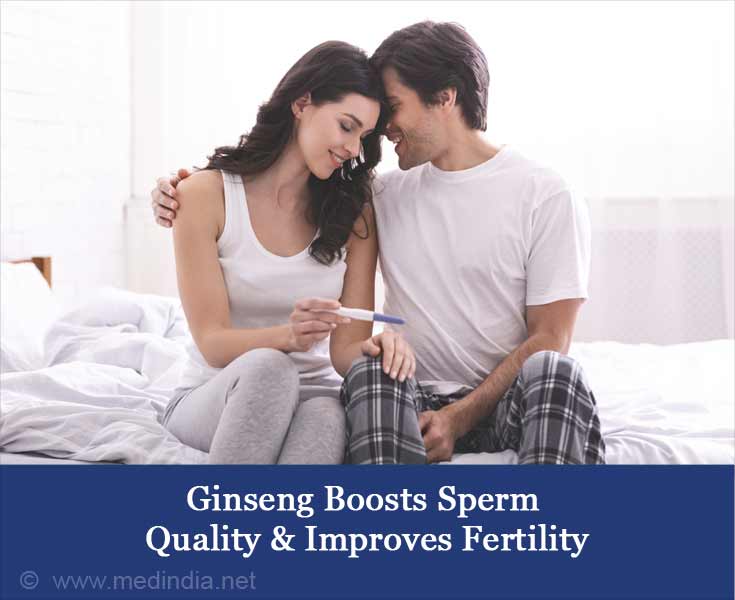 It is found that ginseng is effective against colon, gastric, hepatic and prostate cancers. Ginseng helps in reducing the size of tumor and prevents its spread to other parts of the body.

Compounds present in ginseng lower the level of oxidative stress and inflammation, both of which play an important role in causing cancer. It further helps in flushing out the toxins from the body and leads to the death of cancer cells.

It reduces stress, fatigue and anxiety associated with cancer and improves the energy levels. Thus, ginseng helps in improving the quality of life and helps in the management of cancer. 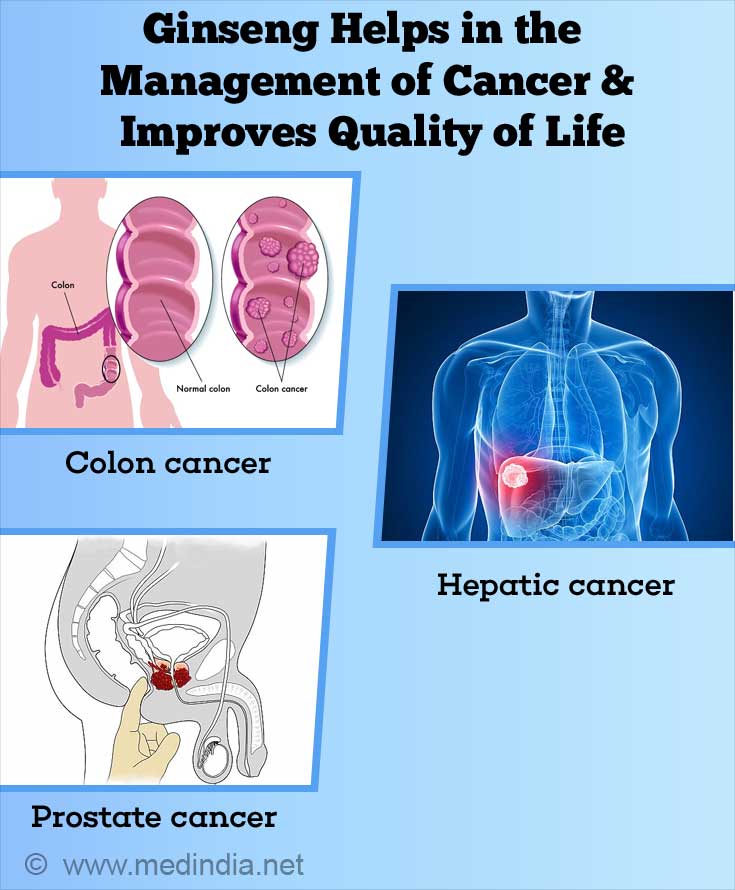 Ginseng increases the production of nitric oxide which in turn causes the arteries to widen. This improves blood flow without increasing the blood pressure.

Note: Some studies had observed that administration of low doses of ginseng may increase the blood pressure. But such an effect was observed in individuals with low blood pressure.

Latest Publications and Research on Top 8 Health Benefits of Ginseng

Herbs and Antioxidants
Herbs are rich sources of anti-oxidants that help build your immune system. Reach out for your spice rack not only to flavor your food but also to get anti-oxidants that fight cancer.
Sign up for Wellness Consult a Doctor Sign up for Selfcare
Advertisement
Health Topics A - Z
A B C D E F G H I J K L M N O P Q R S T U V W X Y Z