Black pepper or "kaali mirch" as it is popularly called in India is a valuable medicinal plant. The scientific name of black pepper is "piper nigrum" and it belongs to the family "piperaceae".

Black pepper which is also known as the king of spices" is widely cultivated in tropical regions such as India, Brazil and Indonesia. Since the 2nd century BC, black pepper has been popular in China. It is commonly found in every Indian household kitchen and it is used in a variety of food preparations.

Besides being used as a culinary spice, black pepper is used as a preservative, a medicinal agent and in perfumery. Piperine, an active compound of black pepper is responsible for the strong, sharp and spicy characteristic of it.

In case you presumed that black pepper is just a taste-enhancing spice, then you need to know a little more about it. Black pepper contains various compounds that are beneficial for overall health. Here are the advantages that black pepper have on health.

Black pepper is an excellent source of vitamin K and manganese. Studies have found that it is also a good source of iron, zinc, copper, chromium, calcium and dietary fiber. Besides this, black pepper contains various health promoting compounds such as flavonoids, terpenes, tannins and alkaloids. Black pepper is a potent antioxidant that fights oxidative stress and keeps free radicals at bay.

Black pepper plays a protective role against stomach ulcers. It works via the following mechanisms:

Black pepper stimulates the liver to secrete bile, which plays a vital role in the digestion and absorption of fat. Such a stimulation in the secretion of digestive enzymes is possible due to the presence of piperine in black pepper.

Since ancient times, black pepper has been used to treat diarrhea. Piperine reduces the volume of loose stools by reducing the accumulation of fluid. It further reduces the number of diarrheal episodes and thus prevents the loss of water and electrolytes from the body.

Bottom-line: While eating khichdi or curd-rice during diarrhea add some black pepper powder to the above mentioned preparations.

Black pepper is also beneficial for individuals with arthritis because it reduces inflammation and pain associated with it.

Bottom-line: Pepper is a natural pain killer. Adding it to diet or inhaling black pepper essential oil can help in relieving pain.

Bottom-line: Reduce your salt intake and go for some black pepper.

Research has found that black pepper fights against depression and it is as effective as anti-depressant drug. But the best part about black pepper is that it comes without any side-effects unlike drugs.

Such an effect is attributed to the presence of "piperine" in black pepper. High levels of oxidative stress in the brain leads to the development of anxiety.

Piperine reduces the level of oxidative stress and protects the brain cells against damage. Piperine also improves the communication and transmission of messages throughout the brain and body.

Piperine further increases the release of happy hormones and keeps depression at bay.

Bottom-line: Choose black pepper which is a natural anti-depressant over drugs.

Studies have revealed that black pepper lowers the level of low-density lipoprotein (LDL) or bad cholesterol and reduces the risk of heart disease too.

Piperine further inhibits the enzymes that promotes the formation of fat. Hence intake of black pepper lowers the accumulation of fat and enhances the removal of fat.

Thus, it lowers the level of LDL cholesterol and increases high-density lipoprotein (HDL) or good cholesterol.

Black pepper helps in the treatment of tooth decay, tooth ache and oral abscess. It is a potent anti-bacterial agent that kills the bacteria which is responsible for dental caries.

Black pepper further prevents the destruction of mineralized tissue of the teeth and thus protects the teeth against decay.

Bottom-line: Mix equal parts of salt and black pepper with water to form a paste. Apply this paste on the affected teeth and leave it for 10-15 minutes.

Black pepper inhibits the growth and formation of tumor. It kills the cancer-causing cells and protects the healthy cells.

Piperine present in black pepper prevents the multiplication and spread of cancer cells.

It further protects the DNA against damage.

Such an anti-cancer effect of black pepper is attributed to the presence of alkaloids, terpenes and polyphenols in it.

Bottom-line: Adding black pepper to food helps in the management of cancer.

Studies have revealed that black pepper plays an important role in improving fertility in males.

Bottom-line: Black pepper is a natural ingredient for improving fertility in males.

Since ancient times black pepper is used as a preservative because it is very effective in fighting against bacteria. Consumption of black pepper protects the body against the negative effect of bacteria. Such an effect is attributed to the presence of health-promoting compounds such as flavonoids, alkaloids and tannins in it.

Name of the recipe: Cottage Cheese With Pepper Ingredients:

Latest Publications and Research on Health Benefits of Black Pepper 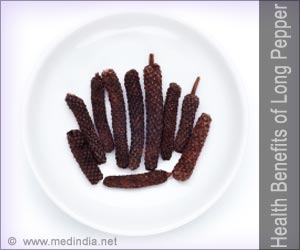 Health Benefits of Long Pepper
Curious about long pepper? Here we decode some amazing health benefits this wonder herb offers.
READ MORE
Sign up for Wellness Consult a Doctor Sign up for Selfcare