Fruit waxing is a process of coating fruits with an artificial or edible wax to improve their shelf life and texture. Find out how safe are the wax-coated fruits for your health

Medindia » Health Information » Fruit Waxing - What it is? Are they Safe to Eat?

What is Fruit Waxing?

Fruit waxing has gained a lot of attention recently and has been a topic of debate among the medical communities. Coating fruits and vegetables with wax have become a common practice to improve post-harvest consumer appeal. The fruit waxing technique gives fruits their artificial freshness and cleanliness. Some wax coating helps to retain the moisture in the fruits and also inhibits mold growth. Recently, there have been a lot of controversies on using fruit waxing and eating these wax-coated fruits that leaves the consumers in a total dilemma.

Wax-coated fruits may appear fresh, have a long shelf life, but can also have harmful effects on the human health. This article explains all about fruit waxing and how safe is it for human consumption.

Fruit waxing is a technique of coating fruits with either natural edible wax or artificial wax. Fruit waxing leaves a thin shiny layer on the surface of fruit in addition to or as a replacement of natural wax produced by the fruit itself. The main objective of fruit waxing is to provide a barrier to moisture loss, prevent bruising, prevent physical damage, and delay browning of fruits.

Apple is one of the most common fruits that are covered with artificial wax. Wax coated fruits are appealing to consumers as these appear fresh and clean compared to uncoated fruits that show browning and lose their firmness quickly. Fruit waxing reduces the loss of water from fruits and thus preserves texture and flavor. Wax-coated fruits also show slow ripening as the wax acts as a barrier to environmental gases and water vapour.

Why is Artificial Waxing Coated on Fruits?

Many fruits and vegetables produce their own natural protective wax coating called cuticle that consists of substances such as fats, resins, or waxes. This natural wax coating on fruits helps to prevent moisture loss from inside fruit flesh. However, the natural protective layer easily wears off after the fruit is plucked from the tree and during the process of packing and transportation.

Therefore, to retain the moisture in the fruit and make it appear as fresh as farm picked till it reaches the consumer, most fruits are covered with artificial waxes. The fruit wax coatings may be composed of polysaccharides, proteins, lipids, and composites. The fruit waxing itself does not control decay of fruits and hence the wax coating is combined with some chemicals.

What are the Fruit Waxing Methods?

The fruit waxing method can be manual or automated. During manufacturing, the waxy coating material is dispersed and dissolved in a solvent such as water, alcohol, a mixture of water and alcohol.

Additives such as plasticizers, antimicrobial agents, minerals, vitamins, colors, or flavors can be added in this process. The film solutions can be applied to fruits by several methods such as dipping, spraying, brushing, and panning followed by drying.

The process is performed by applying the wax coating over fruits surface using a brush with soft bristles or absorbent cloth. After application of edible wax, the fruits are air dried for about 15 minutes. It is a time-consuming process and also requires manpower.

The dipping method for fruit waxing is used when the fruits are coated with paraffin wax.

The fruits are dipped in melted paraffin wax coat for about a second. The paraffin solidifies immediately on the fruits surface after it is removed from the wax bath.

This is an automated method of fruit waxing. The liquefied wax is dispensed over the brush that continuously applies a thin layer of wax coating over fruits surface. For even application of edible wax, the brush needs to be completely saturated with the wax. The wax can be sprayed using a pump through low-pressure nozzles. 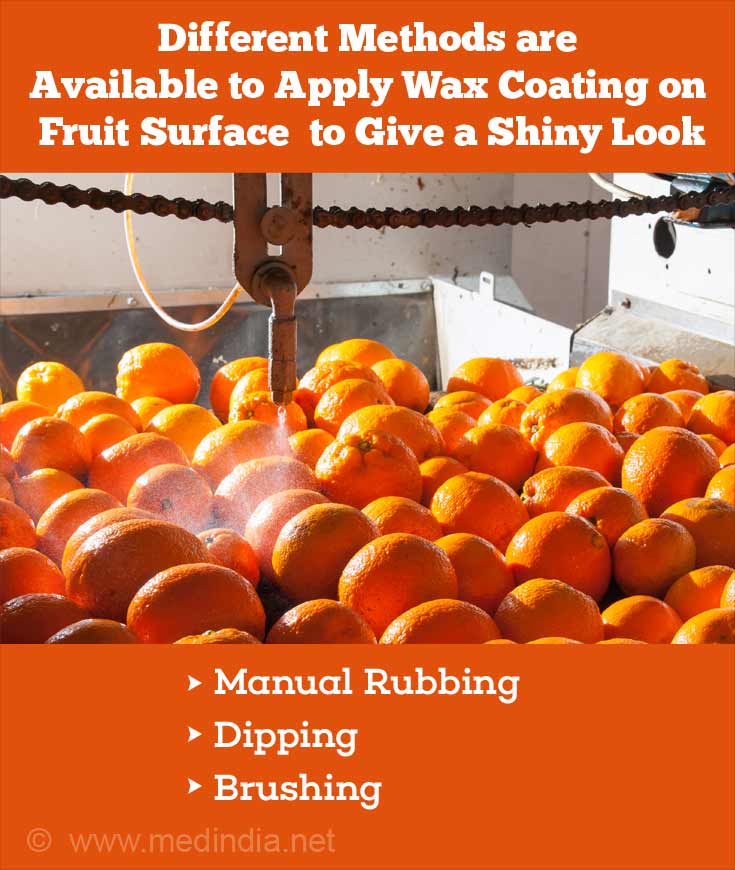 Are the Wax-coated Fruits Safe to Eat?

Whether wax-coated fruits are safe to eat or not totally depends on the kind of wax coating used. Research by some scientific authorities suggests that food-grade wax is safe to eat. These are the edible waxes that are considered safe as they are not broken down by the body for absorption and are eliminated by the body.

However, most fruit waxes are mixed with morpholine and its derivatives (MAID) to ensure that they are applied thinly and evenly. In the presence of nitrate, contained in diet, morpholine can be chemically nitrosated to form N-nitrosomorpholine (NMOR) a potent carcinogenic compound.

Morpholine is also believed to cause impaired liver or kidney function. Morpholine at the levels 0.03-0.3ppm, is likely to be of low-risk to human health. However, above this level morpholine can be toxic and unsafe. Chronic consumption of wax-coated fruits and vegetables containing morpholine could present a slight risk for cancer in certain individuals.

What are the Harmful Effects of Eating a Wax-coated Fruits?

The fruit waxes are mixed with additives such as glycerols, lactic acid or acetic acid to adjust the pH of coating material. In addition, the fruit waxes may also contain traces of preservatives, antimicrobial agents, and texture enhancers.

Morpholine is present in most fruit waxes to give thin and even films. The safe dose of morpholine in humans is 4.3ng/kg body weight/day. Repetitive consumption of morpholine as well as some other chemical agents present in fruit waxing can be hazardous to health

The health risks associated with regular consumption of artificially wax coated fruits include,

However, inside the body when it comes in contact with nitrate, it forms Nitrosomorpholine (NMOR), a genotoxic carcinogen that poses a risk of liver or kidney cancer.

2. Risk of Liver and Kidney Damage

Experts report that on oral and parenteral administration or after inhalation, morpholine is well absorbed and is distributed in the body fluids. Ingestion of morpholine through daily consumption of wax-coated fruits can affect liver and kidney function.

Many edible coatings are made from ingredients that could cause allergic reactions. These allergens include protein substances such as soy, whey protein, casein, and peanut proteins. 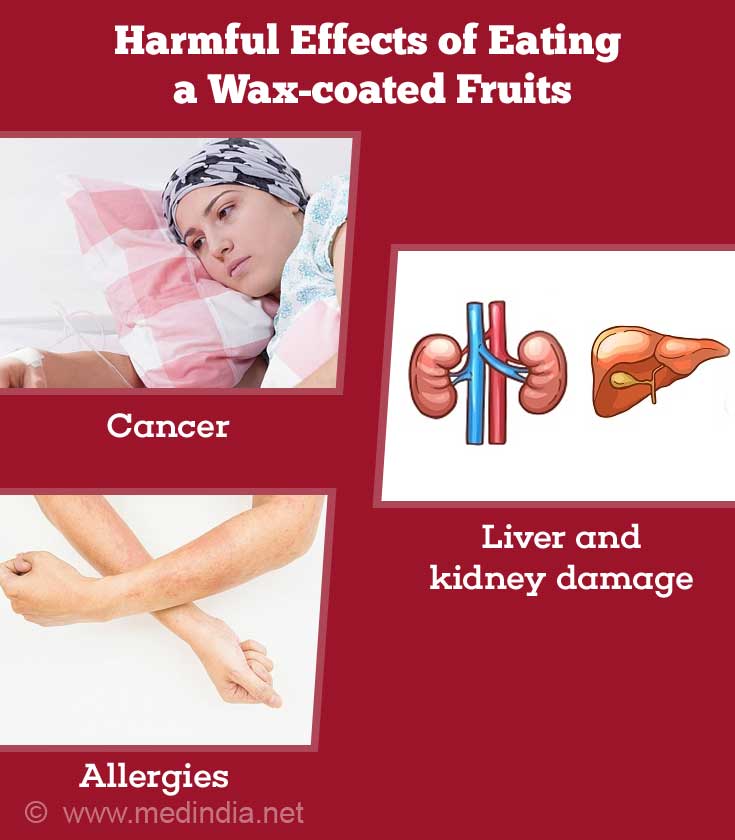 The use of morpholine as a glazing agent in fruit waxing is common. Although it is present in negligible amounts in the waxy coating, accumulation of NMOR by daily intake of coated fruits/vegetables is a serious threat to health. To overcome this problem and prevent the health hazards of fruit waxing follow these tips given below:

The Lesser Known Fruits with High Nutrition Value Some fruits that are less known to the common man today have hundred times more vitamin C, carotenoids, and antioxidants as compared with those in the well known fruits. These underutilized fruits are highly inexpensive too.

Top Vegetables and Fruits for Healthy Diet Include vegetables and fruits as part of your diet and improve your overall health.

How to Choose the Best Eczema-Friendly Moisturizer for Children?
View all
Advertisement